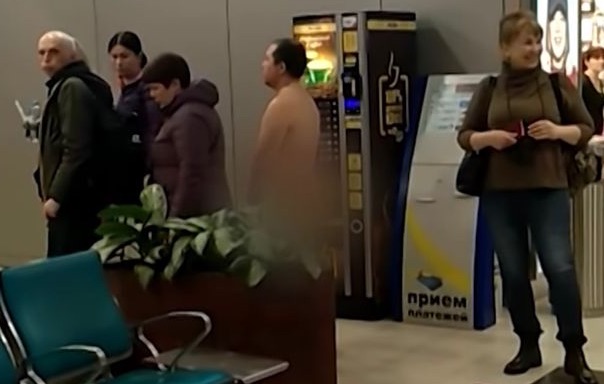 Can’t fault the logic there.

I’ve caught a few planes in my life and normally I can relate to the idea that you wanna wear clothes that are as comfortable as possible and usually as light as possible because they can get pretty stuffy during long flights, but I’ve never seen someone try to get on a plane fully naked until now.

This is how this unnamed 38 year old man tried to board a plane in Russia’s Domodedovo Airport in Moscow recently. The best thing about it was that it didn’t even seem like he was wasted or on drugs when he was doing this and just thought it was a normal thing to do. One person at the airport explained how it went down:

He shouted that he was naked because clothing impairs the aerodynamics of the body. He flies with more agility when undressed.

I mean I guess that’s one argument but I’m not really sure why anyone needs to fly with more agility in the first place. Or if being naked even makes you more agile. I reckon it would probably make you a bit less nifty to be honest as you would just be worried about your dick flying around everywhere and that, but maybe this Russian guy knows more about the situation than me.

In any case, even if he does he didn’t get to test it out as he was arrested at the airport after he tried to get on the plane. It’s kinda nuts he was allowed to just stand around naked for so long as well, but I suppose that kinda thing is par for the course in some parts of Russia.

For more of the same, check out this naked man stuck in a gate who blamed it on hunting ghosts. Course you did mate.