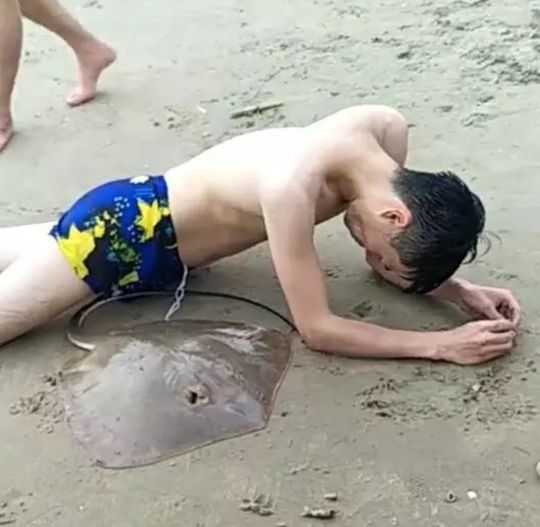 I don’t really like swimming in the sea but that’s more because the salt water really annoys me – not because I’m scared of a stingray or an octopus or shark or something, although I can get why people might be scared of that, especially after seeing the video below.

The video comes courtesy of a beach in Sanya – in south China’s Hainan province – where some dude has been left writhing in agony on the beach after his dick was stabbed with the stingray’s barbed tail when he took a dip in the water. The dude is just screaming whilst a bunch of people stand around trying to figure out what to do about it, including the fireman and the police. Useful.

Ok so eventually the fireman used their tools to cut off the barbs of the stingray but there was a lot of time of them standing around doing nothing when he was in clear agony. Apparently the stingray was left on the beach to die and the guy was completely fine and able to make it to hospital to get checked out without the use of a stretcher. Here’s hoping that he stayed that way because it looks like he already suffered enough from this injury.

For more of the same, check out this sting ray barb getting removed from a guy’s leg. Looks like the guy above got kinda lucky.