This was always destined to happen.

A member of a Facebook group where men jokingly post photos of themselves pointing loaded guns at their dicks has accidentally shot himself in the balls.

The unidentified San Diego man is a member of the “Loaded Guns Pointed at [B]enis” Facebook group, according to Vice. The group is used mainly to mock responsible gun owners, with members sharing pictures of loaded guns pointed at their penises with their fingers hovering over the trigger.

Well it was only a matter of time before this happened:

The man posted a video of himself showing off his .45 caliber 1911 pistol, then pressing it against his privates. After a few seconds, the gun discharges.

The wounded man documented what happened next in a series of posts, writing:

I’m not kidding. I just shot myself. God’s caliber went through my scrotum, mattress, boxspring and floor.

As Vice reported, the man initially thought the bullet had just grazed his body, but a trip to the hospital confirmed that the round had gone straight through his ball sack, leaving an entry and exit wound. Yeowch.

Turns out it wasn’t a graze, that round went right the fuck through me. What I thought were two graze wounds, turned out to be an entrance and exit wound.

He also shared a photo of himself laying on a gurney wearing a hospital gown and pointing his finger at his privates in a gesture mimicking a gun. So at least he’s got a sense of humour about it eh?

Here’s a look at the sort of image you can expect to find in this group: 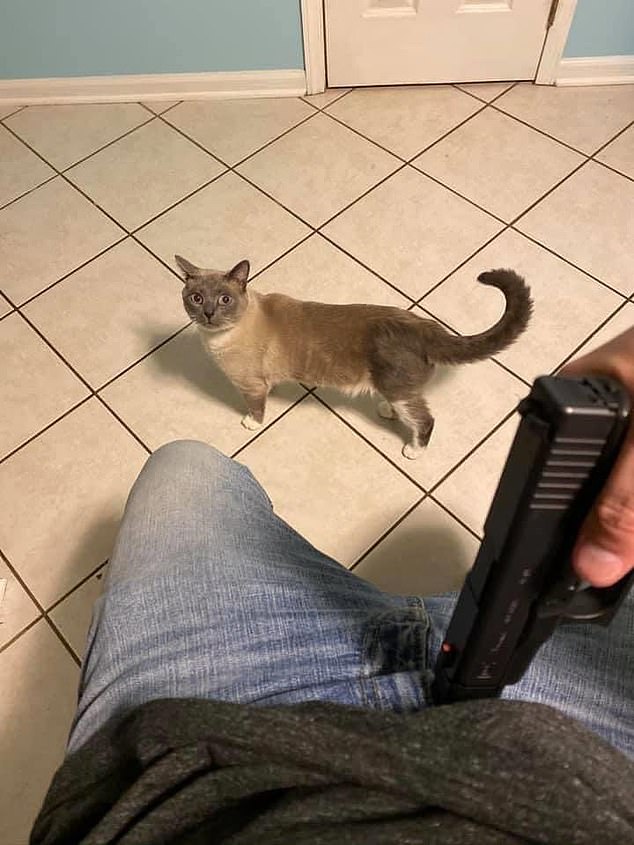 An admin for the Facebook group reported that the victim was ‘100% okay’ and even went to work the following day. TBH I bet this was what every member of this insane Facebook group secretly wanted. I mean you don’t just join a Facebook group dedicated to men pointing guns at their dicks without (at least subconsciously) wishing that one of your fellow members accidentally blows his dick off. Well that day finally arrived and amazingly, the man is being celebrated as a hero:

The reason we are calling him king is partially because the poor guy already shot himself, don’t think he needs to be chastised as well… I’m quite sure he’s learned his lesson without the entire world calling him an idiot.

Well you would think the mods of “Loaded Guns Pointed at [B]enis” would ban this man after he embarrassed them like this. After all, he hurt himself doing the one thing the group is dedicated to – taking the mickey out of gun safety measures. But it looks like they also double up as a support group if said mockery results in blowing your dick off. Fair enough I guess.