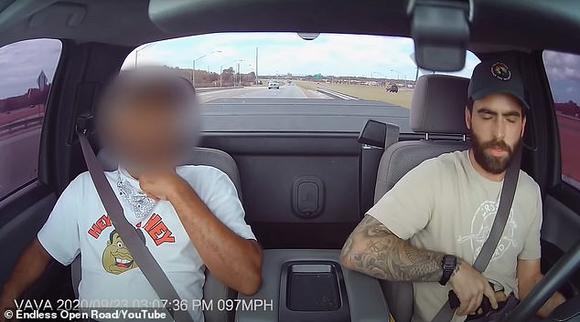 A Florida man was videoed on his own dashcam as he fired a gun through the windshield of his car at a fellow driver, reports MailOnline.

The man behind the wheel, Marco Mazzetta, posted the video to YouTube claiming he was trying to defend himself after believing he was in danger of being shot himself.

Um… see what you think:

Mazzetta says he only pulled his gun out after the other driver, who was also caught on camera, began shooting at him first. As he told WESH 2:

I’m not a fan of guns; I’m a fan of not getting shot. I know this video doesn’t capture my smartest moments but I hope any idiot criminal with a gun watching thinks twice before loading, brandishing & aiming their firearm at someone over a traffic infraction.

Not a fan of guns? Huh, could’ve fooled me. As someone who is also not a fan of guns or getting shot I’m pretty sure I would’ve handled the situation differently i.e. by not firing bullets at another driver through my own damn windshield. How about not engaging with them or taking the next exit or maybe putting a few dozen miles between yourself and the lunatic driver you believe is trying to shoot you? Seems a better approach than speeding to catch up with them and shooting a gun through your own windshield, but maybe that’s just me.

Thoughts and prayers with the terrified passenger btw. If only the driver had been a bit more like him. Well, minus the part where he took off his seatbelt at probably the worst moment possible. Safety first, kids!

To watch a man in South Yorkshire get dragged out of his car and beaten up after sticking his middle finger up at a 6’7″ lorry driver, click HERE. Remember – there’s always someone bigger and crazier than you on the roads.