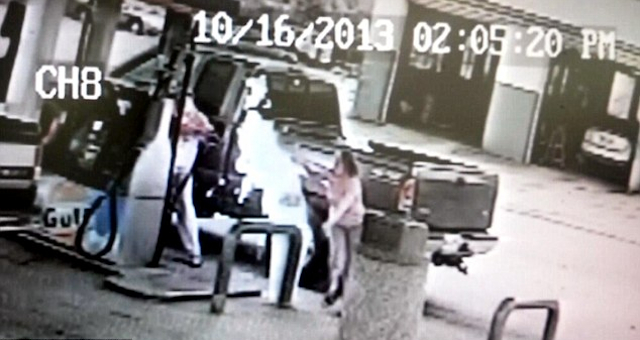 This has got to be one of the dumbest things that anyone has ever done ever, period.

We’ve got another contender for stupidest person of the year right here and his name is Austin Dawkins and he either has no common sense at all or flagrantly likes to disobey signs that tell him not to have any naked flames in a petrol station. Of course, he’s American and of course he’s from one of the southern states, only this time it’s Georgia.

Dawkins – who at the age of 37 should really know better – was at the petrol station in Clarkesville with his wife Jessica when he decided that it would be a good idea to start playing around with a lighter near the nozzle of the petrol pump whilst he was talking to her. You don’t need to be a rocket scientist to figure out what happened next – the fuel suddenly ignited and Jessica was on fire.

She paced it off and tried to get rid of the flames, but not before she had suffered second and third degree burns all over her body. She was airlifted to a burns unit in Atlanta and has been treated and since released. The incident actually took place on October 15th this year but video footage has only just been released.

As for Austin, he escaped from the incident with just minor burns. Jerkoff. He is however being charged with misdemeanour and reckless conduct and could face a year in prison if convicted. Let’s hope he is because this kind of behaviour is just stupid and a lot more people could have got hurt if he hadn’t have been so lucky. Dumbasses like this don’t deserve to walk around doing ridiculous stuff like in this video.