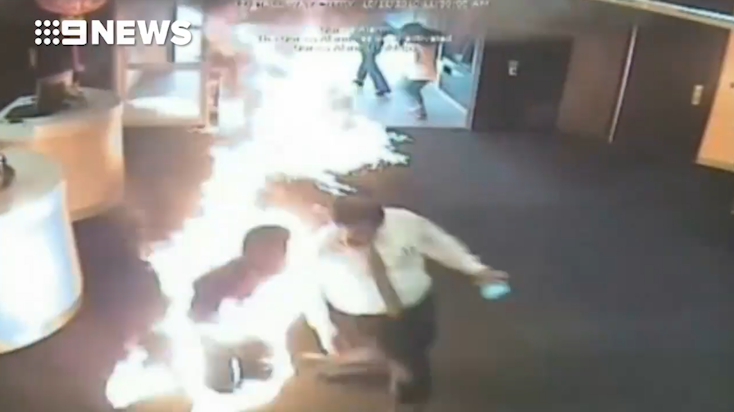 That’s one way to get their attention.

I’ll agree with the sentiment in this story that there’s pretty much nothing more annoying than queuing and waiting somewhere like the bank for ages with seemingly no end in sight, but I think this guy’s actions are a little over the top.

The guy’s name was Nur Islam and he was 22-years-old when he entered the Commonwealth Bank in Springvale, Melbourne and started pouring petrol from a 20 litre container all over his body. He then lit himself on fire with a lighter in his pocket.

This ended up destroying the $2.5 million building and injuring 33 people, including children. Islam was in hospital for four months with burns on 60% of his body. When questioned about his actions by the Melbourne Magistrates Court, he insisted that he didn’t want to hurt anyone but was angry at being kept waiting for so long. I dunno how he thought this would be a way to deal with his problem, but nevertheless that’s what he ended up doing.

Islam is now facing 108 charges including arson and property damage by fire. He pleaded not guilty to 33 of them, mainly relating to intentionally causing injury and serious injury. His trial continues but considering the video you can see above and the fact he admitted to doing it, it seems unlikely the guy is going to get off.

Just go for a walk and chill out or something if you’re waiting that long and it’s stressing you out, geez. For more fire, check out this viral fire challenge going horribly wrong. Don’t play with fire basically.