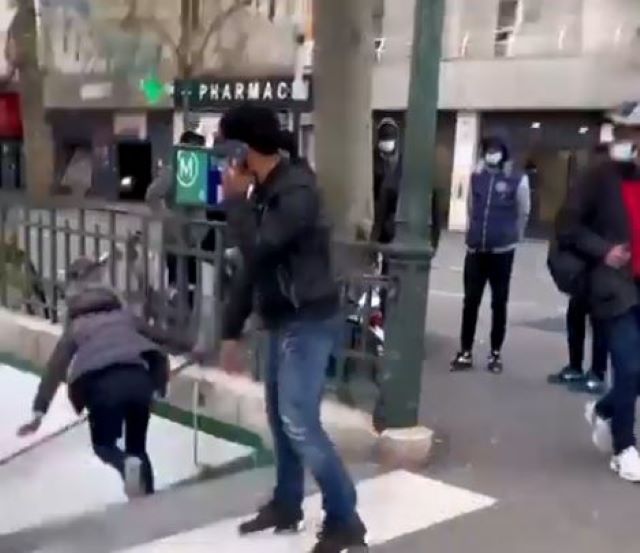 A woman was pushed down the stairs of the Porte de la Chappelle metro station in Paris this week, prompting widespread outrage after the footage went viral, and also providing ammunition to anti-immigration types in the city.

No word on what the confrontation was about, but shocking to see what the young man does before leaving the scene:

So that’s the clip that’s gone viral, but a longer version shows the woman also behaving like an idiot before being pushed. See if this changes your view of things:

Nice recovery/balance from the woman either way. Could have easily faceplanted down the stairs and smashed a couple teeth out, never mind cracking a bone or two. In fact her footwork was so impressive I reckon this may have actually happened to her before?

You might say the lady isn’t entirely blameless given that she punches him in the arm first, but I’m not sure his reaction would fall under ‘self defence’ in court. I mean what kind of lunatic shoves a woman half his size down a flight of stairs? Both their futures would be looking pretty bleak if that railing wasn’t there for her to grab onto. Good news is she’s OK but still, pretty depressing to see. Sacré bleu indeed!

For the husband who pushed his pregnant wife off a cliff so he could cash in on personal accident insurance, click HERE. 1,000ft – quite a drop.