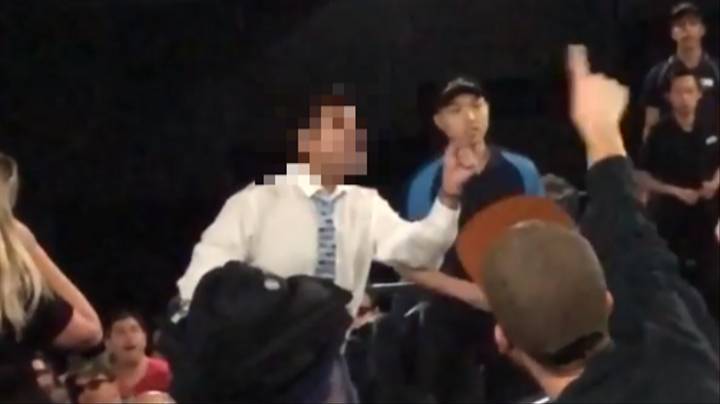 I’m not gonna lie, it can be kinda annoying/distracting when you rock up to the cinema and someone is playing with their phone, but I think if you resort to shouting at them or even worse punching them then you’re probably gonna be remembered as the major dickhead in the story – and it’s gonna be even worse if there’s a video of the situation as well.

This is the unfortunate situation for one Star Wars fan in Vancouver who rocked up to the theatre to see The Rise Of Skywalker but was dismayed to see another fan on his phone during the opening credits. As such, he decided to shout and scream at him and then punch him in the face.

Obviously, this wasn’t going to go down too well and led to him being escorted out of the cinema by some weedy looking cinema attendants (is that what you call them?). Thankfully someone was able to film this as well as he went on one of the most pathetic rants of all time before being escorted away by someone about half his age and size:

This dude lost it when someone checked their phone screen during the opening of @starwars The theatre was forced to restart the movie from the beginning. The irony was beautiful. @globalnews @globalbc @ctv @cbcvancouver @bt_vancouver @cbc #vancouver #canada #starwarsfan @dailyhivevancouver

Lol what an absolute loser? How does this guy even exist in real life if he’s going to get so upset about someone using their phone at the start of the movie and then go on a rant like this? Always blows my mind how people can act like that over the age of about 7, but here we are, again.

the story gets even better when you hear the guy’s excuse for looking at his phone. Not sure if this is true, but here’s what Joe Bond said about it:

I was just checking my phone because I was worried about my two young children who were at home with a babysitter for the first time.

He lost it at me. I told him to calm down and if he doesn’t calm down then I was going to get somebody – and then he hit me in the face.

Star Wars fans are very serious people, but I think this guy was on the next level.

I dunno if I’m buying that excuse, but it makes the story even better so I’m just gonna roll with it and leave it in. Star Wars fans huh? Calm down.

For more of the same, check out this Star Wars fan losing the plot after a projector fault ruins the movie for him. Calm yourselves!