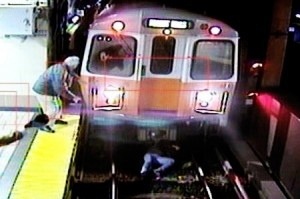 Wow! This is like some kind of Jean Claude Van Damme action movie! But in real life! Whoa! 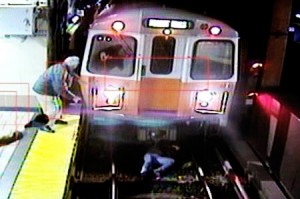 So, the other day Lags from the Gallows (yeah I’m following him on twitter, that’s pretty hip right?) posted this link on saying something like ‘wow, I thought this kind of shit only happened in action movies’ about some dude being pulled out of the way of a moving train at the Madrid metro station. I immediately thought about the scene in the criminally underrated Maximum Risk (didn’t even make my own top 5 JCVD movies) where he sees an enemy across the platform or something and jumps in front of a train so he can run after him and extract some information before killing him. Obviously that is nothing like this video, but I still thought it would be way cooler than it actually is.

Like, the problem with the link Lags had tweeted was that it was from the BBC website and it just totally killed any excitement that may have once existed from watching this video, as a really boring female newsreader described the ‘action’ as it happened in a really dull monotone. It wasn’t very exciting anyway, I mean it looks kinda cool but the guy rushing to save the collapsed guy on the track (who was drunk, of course) doesn’t even really rush or look like he’s under any pressure to move him. Although he does only just get him out of the way in time, it’s just not as exciting as the title of this post or Lags would have you believe. Anyway, I guess you probably want to watch it now so here it is, without sound – I recommend listening to some speed metal whilst watching it to make it more exciting. Fvck, maybe just listen to Gallows that would probably do the trick:

There’s a cool kind of JCVD-esque backstory to it as well – the guy who pulled him out of the way was a young policeman, only two weeks out of the academy. Kinda sounds like it could have fitted well into the plot of Les Incorruptibles.