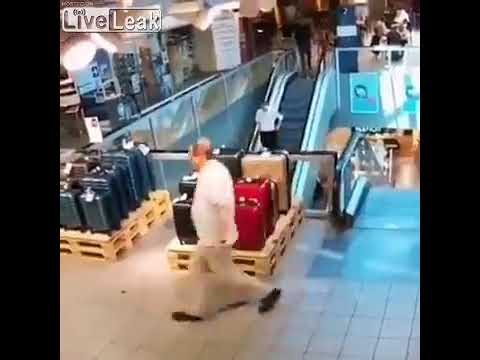 An accident waiting to happen (NSFL).

There’s few things more psychotic than shitting on the floor in a public space, but of all these sorts of videos we’ve shared I don’t think we’ve ever seen someone do it so casually without breaking his stride or even reacting whatsoever.

Flawlessly executed, and indeed an accident waiting to happen:

Tragic stuff. If you watch the video closely you can see the man taking very short and tight steps in the moments leading up to him pooping on the floor, which suggests he had held it in for as long as possible and knew he was on the final clench. So he shortened his steps as a means to drop his load as ‘tidily’ and discreetly as possible. I mean just imagine if he was walking faster or taking big long steps – there’s no telling where that poop would have ended up.

As for the poor victim behind him who slipped and fell into another man’s faeces – what can you say really? Stepping in shit is one thing, but slipping and falling in it? That’s some tough luck right there. Wrong place, wrong time. No one wants to see it happen. But such is the world we live in.

To watch a man out in public mistakenly trust his fart and end up shitting everywhere, while wearing flip flops no less (!), click HERE.