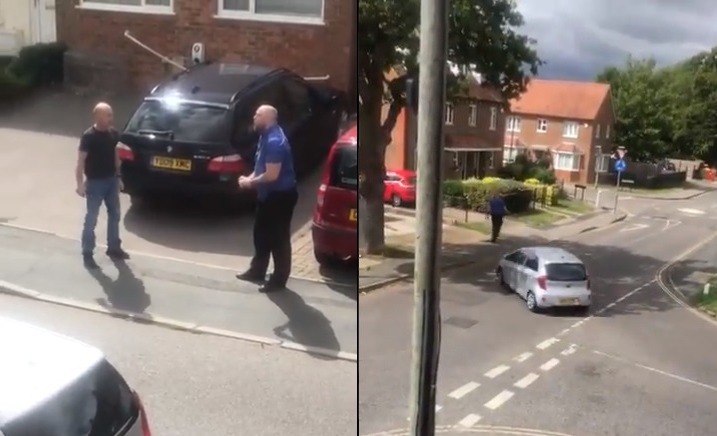 Bailiffs aren’t exactly the most popular people around owing to the fact their job is to basically intimidate you, barge into your home and bully you into handing over all your possessions. But if you’re in that position in the first place – that’s too bad. Attempting to murder the bailiff who has shown up at your door isn’t going to do anyone any favours, is it?

Especially when it’s all caught on film, with your number plate visible, and a whole bunch of witnesses watching. Get a load of this footage taken on Wyvern Way, Burgess Hill, West Sussex this week:

Can’t believe he done that 😂 pic.twitter.com/5fHIkOuRTv

Welp, pretty sure that’s an attempted murder charge right there. Although he did get out of the car afterwards and punch him so I guess if it really was attempted murder he would have tried to finish the job?

Either way, according to the BBC the assailant was ‘found nearby shortly afterwards’ and remains in custody. Considering he didn’t have the balls to fight man to man and instead got into his car and ran the dude over, I’m not sure how well he’s going to fare in prison, but that’s exactly where these 10 seconds of madness are going to land him. Good job there buddy.

The victim has been left with “multiple serious injuries” and was “understandably shaken”. Speedy recovery mate, whoever you are! Yeah OK he might be a bailiff but hey, someone’s gotta do it.

To watch a group of protesters in Brazil stand in the middle of the road and promptly get run the F over, click HERE.