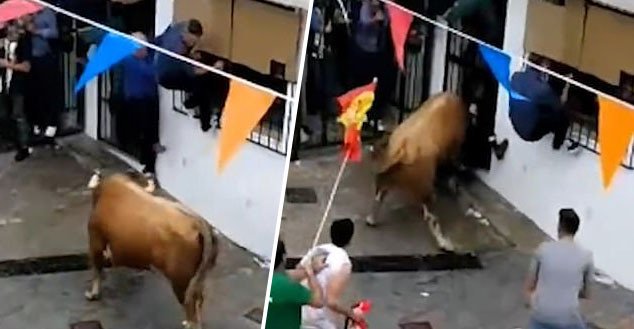 I still don’t really get why bull fighting and bull running is still a thing that happens over in Spain, but it still does and people are still getting majorly fucked up by the bulls during it.

Not really sure what the appeal of getting so close to rabid bulls that they literally might kill you is, but people are still doing it and people are still dying. This time it was the turn of  74-year-old pensioner Juan José Var, who was attending the Toro Embolao event in the town of Vejer, Cadiz over the Easter weekend.

Whilst it’s true that Var was a bit unlucky as he did try and get out of the way of the bull by climbing up a wall, the fact of the matter is if he wasn’t standing about two metres away from an 82 pound savage bull then he wouldn’t have been gored and he would still be alive. This is a pretty horrific video as it literally shows someone being killed by a bull, so if that’s likely to affect you then don’t tune in:

Although you see Var being dragged away behind the gate by the people in the crowd, he suffered a punctured lung and several broken ribs and after he was taken to hospital he ended up dying from his injuries. It is sad that this happened, but like I said at the start of this article the fact is if bull running wasn’t a thing and Var didn’t insist on standing so close toa bull and probably taunting it then none of this would have even happened. Think about that next time you feel sorry for someone getting gored by a bull.

For more of the same, check out this matador getting his butt destroyed by a bull. Yeowch.