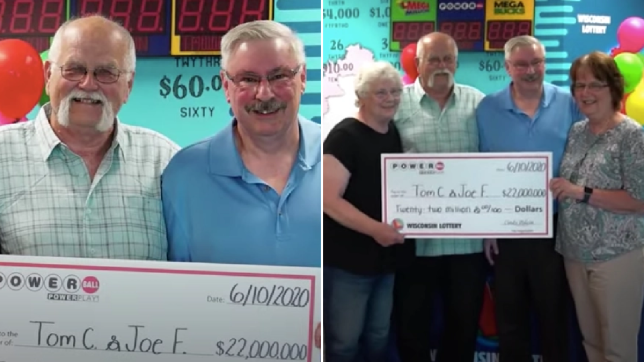 A Wisconsin man who promised a long lost friend back in 1992 that he’d split his lottery winnings with him if he ever won has kept true to his word after bagging a $22 million Powerball jackpot.

Tom Cook and Joseph Feeney shook hands 30 years ago and promised each other they’d split the winnings if either of them ever won the Lotto. Cook says the 1992 handshake was one of the first things that came to mind after he realised he’d won while checking his numbers over breakfast.

My favourite part of the story has to be Joseph Feeney’s reaction when Tom called him to break the news (via Fox26):

“He called me and I said: ‘Are you jerking my bobber?” Feeney said, recalling the moment he found out that his friend had won.

How American can you get? I mean, “are you jerking my bobber?” Really?

Tom opted for a one time cash payout that works out to $16.7 million, which means each man gets about $5.7 million after taxes. Here’s what Tom said about the phone call:

That happened many years ago, and it kind of continued,” Cook said. “A handshake’s a handshake, man.”

“I’ve got grandchildren, great-grandchildren, and now I can spend time with them without worrying about if I’ve got time to go and where we can go and afford it and whatever. I can’t think of a better way to retire.”

Talk about a good friend! Judging from the pictures I’d say Tom and Joseph are in their late sixties/early seventies so maybe not the best time in life to win $22 million on the lottery, especially if they wanted some time to blow through it. Like Tom says though they can now spend it without worrying and leave some to their kids, grandkids and great grandkids too. Happy retirement, fellas!

For the uni student who won the lottery while his dad was bollocking him about being unemployed, click HERE.