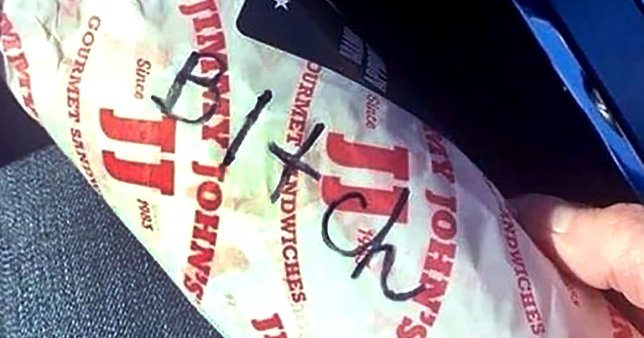 ‘That’s a BLT with cheese mate.’

It’s safe to say that the names that service workers often write on our sandwiches or coffees or whatever are pretty dumb and hilarious and often 100% wrong, but it’s really something else to get angry about them – most of the time they’re just doing their best in a busy and hectic environment.

However, I think if someone had written on my wife’s sandwich that she was a bitch then I might just kick off about it because that is pretty unnecssary and unkind isn’t it? In fairness to the guy people have heard of service workers doing stuff like this before so maybe that’s why he got up and kicked off about it, but the thing is that he was made to look pretty stupid when it was actually revealed to him that the handiwork actually stood for a BLT with cheese.

Whoops. The guy at least saw the funny side to it and decided to post it to his Facebook to give everyone a good old fashioned lol:

Lol. Of course, the whole thing could quite easily have been staged by American sandwich firm Jimmy John’s to bring them more publicity but it seems kinda too dumb for that.

Here’s hoping – ever the cynic these days but can you blame me? Starbucks even admitted they told their employees to write dumb names to get more reach on social media. 2019 people.