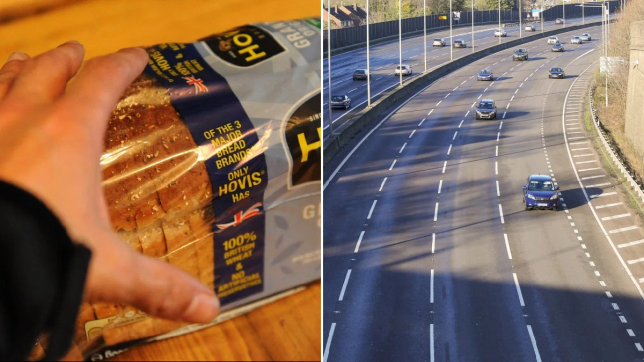 A driver has been fined after telling officers he had driven three hours from Nottingham to London to buy bread ‘because it was £1 cheaper’.

According to the BBC, the man was caught speeding at 110mph on the M1 on the way back to Nottingham, and said  the 127-mile journey was necessary travel because bread is cheaper in London.

Even worse, his kids were in the car:

Just stopped a car doing 110mph on the M1 north. The purpose of the journey from Nottingham? To buy bread in London because it was £1 cheaper. He also had his 2 young children in the car! Reported to court. #thatcouldcostsomedough #StayAtHomeSaveLives pic.twitter.com/LX4TmEM4i5

Fair enough he’s acted like an idiot but did he technically break lockdown rules? Going out to buy food is on the list of valid reasons to leave your home, but is there any legal restriction on area, distance, means of travel etc? Then again his valid reason was that he was going to buy bread that was £1 cheaper, which was obviously untrue and so maybe he dug his own grave there. Was there even any bread in the car?

Maybe he should have said it was for toilet paper instead. We’ve all seen what a premium product it is these days.