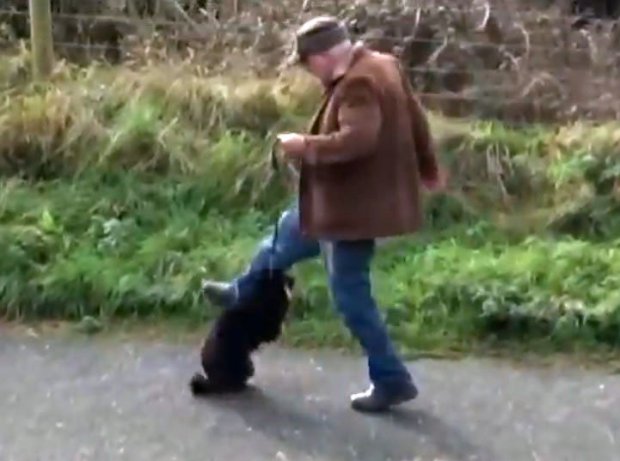 If you decide that you’re going to get a pet, then you pretty much need to make the decision as well to love it unconditionally and treat it with the utmost respect and adoration, otherwise what’s the point?

Case in point is this absolute rotter from Aberystwyth who was filmed somewhere near Felin Y Mor Road on November 11th at around 1:45 pm treating his pet dog like absolute garbage. The guy was walking his dog when he decided to swing it around by its neck via the lead, and then punch and kick it for good measure too.

Not sure exactly what he was getting out of doing this, but take a look for yourself:

What an absolute scumbag. The RSPC are now attempting to track the guy down so they can bring him to justice – cruelty to animals is an offence that is punishable with a six month jail sentence:

The caller who reported this to us states that this man swung the dog by the lead and punched and kicked the dog repeatedly using his fists and feet.

The abuse went on for a length of time where the dog was heard to be crying and yelping.

The video footage shows the man trying to kick the dog, hitting the dog and swinging the dog around by the lead.

It is very shocking to watch and is horrible to think what the little dog was going through.

Hopefully he wasn’t injured from this awful incident.

Here’s hoping, although I’m not holding out too much because the guy seems like he probably does this kind of stuff all the time and doesn’t really care either. Sure it probably won’t take the RSPCA too long to track him down, but if you’ve got any info then hit them up – it can’t happen soon enough if you ask me.

For more of the same, check out these brothers who filmed themselves beating up their dog, then got the crap kicked out of them too. What goes around comes around.