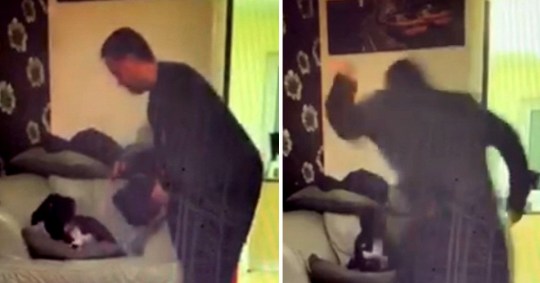 They say that dogs are a man’s best friend, yet there are still complete and utter morons that treat them like the guy in this video.

The video below show 36 year old Kieran Huelin (like Huel?) punching his dog Rosie for doing literally nothing but sit on a chair looking cute. She then cowers away from him and looks absolutely terrified following the beating. It’s quite upsetting footage so if you don’t want to see a dog getting beat up I suggest you don’t bother clicking on the video below.

Here’s what Inspector Danni Jennings – who investigated the incident – said about Kieran and Rosie:

Dog owners should always make sure their pets are handled properly and not stressed or endangered with any aggressive or anti-social behaviour.

Training should always be reward-based and should not include physical punishment as this may cause pain, suffering and distress.

Rosie is a lovely and bouncy dog in real life but on this footage she is quite the opposite.

That’s damn straight but it really is shocking how people need to be told that, isn’t it?

Fortunately for Rosie and everyone else whose blood this makes boil, the RSPCA were sent into investigate after this video was donated to them and Kieran has now been banned from keeping dogs for five years are well as being given a 12 month community order and an alcohol treatment order. He was also fined £800 costs and forced to pay and £85 victim surcharge. Rosie has been placed into the care of the RSPCA.

I mean the guy should really be banned from keeping any animals, but I suppose this is better than nothing. Apparently the actual video was too shocking to be shown in full so maybe he should even have received a jail sentence. Can’t go around treating animals like that, no way.

For more of the same, check out another ultra chav who beat up a dog for thirty minutes. What is wrong with people?