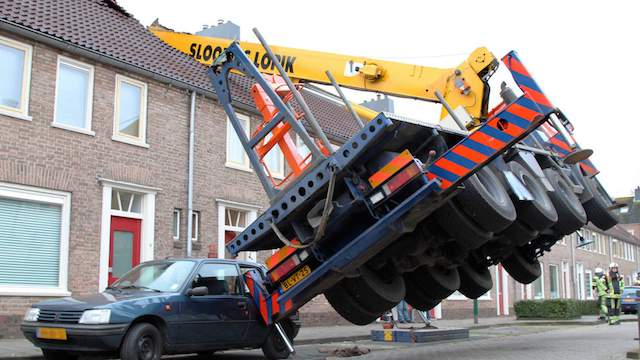 Make sure you watch to the end of the video, it’s worth it.

Not sure where this would rank in the worst marriage proposals of all time but you’ve got to think that it would at least be up there near the top, although she did still say yes so maybe it wasn’t that terrible.

This crazy Dutch guy had the idea that he would descend from the sky outside his girlfriend’s bedroom window on a crane, singing her favourite song before asking for her hand in marriage in the town of IJsselstein. Unfortunately though, the guy was a complete noob with the crane and it wasn’t secured properly which meant that the dude managed to crash it into two houses with it like a complete doofus. It then caused even more damage as it was removed, with several nearby houses having to be evacuated.

What a complete moron. I would be so pissed off if someone fucked up my house because they wanted to do something elaborate to propose and then they didn’t even do it properly and just messed up my house instead. To be honest I’m kind of surprised that she accepted his proposal considering how dumb and retarded he must have appeared but obviously she isn’t planning on having him doing any DIY around the house when they get a place together.

She did accept though and the two high tailed it off to celebrate in Paris and presumably make plans for moving out of their area before all of their neighbours kill them. Thankfully nobody was hurt in the incident but the damage to the houses looks pretty serious.

Make sure you watch to the end of the video, it’s worth it.