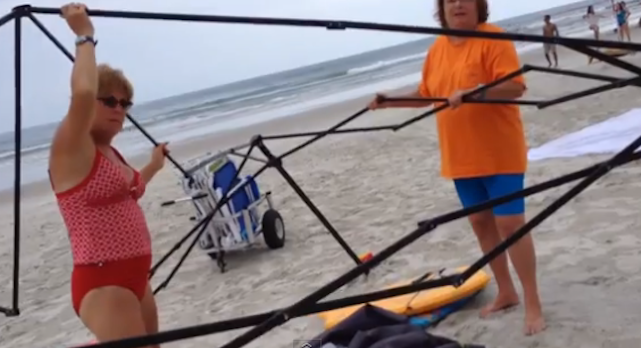 Only in Florida huh?

So last week we had middle aged women being racist scumbags on trains, and this week we have a bunch of them stealing stuff off some guy on the beach.

It’s probably just better to let you watch this video and let the hilarity and awkwardness ensue rather than spoiling it by describing it, but there’s also a detailed description of the events from the man himself below the video.

We were enjoying a great family day at the beach. My sons needed a nap. We were staying a block from the beach and decided to walk them home, and leave our chairs and canopy set up. I’ve been to New Smyrna Beach a thousand times and felt it was safe enough to do so. We were gone for about an hour and a half.

My dad is a local and mentioned that Beach Patrol may pick up items that are left alone. I was skeptical but volunteered to check.

My sister, Lib, offered to join as I was walking out the door but I told her I’d take care of it. From the boardwalk I was dismayed that I didn’t see my canopy set up. Then I spotted our chairs loaded up in our beach cart with two women (attempting) to break down the canopy. I ran down the ramp to the beach and pulled out my iPhone to share what I was seeing with my wife and sister back at the house.

If I were to judge a book by its cover, theft would not have been my first thought. I honestly thought they were being neighborly because NSB is Mayberry on the beach. I was surprised when they said it was theirs and stuck with the story. They were grasping for straws by saying my oldest son’s beach toy belonged to them. I offered to let them move along but the one woman “was not making it slide.”

Her partner aka Tankini threatened to “take that camera and put it in the grass.” There wasn’t a blade of grass in sight so you know she meant business. She slapped at my phone, scratching the screen with a ring. I thought it was hilarious that this lady that was clearly in the wrong was actually coming at me. I did not intentionally stop the recording.

What followed was pure gold. I continued to back up as we went around the canopy frame. In the most bizarre moment she gnashed her teeth, lunging at me with an open palm and said, “I’ll grab your dick!” I appreciated the offer but didn’t feel the chemistry was there.

The two then said they needed to call “Pat”, which may or may not have been the androgynous SNL character. He or she was going to apparently clarify what they were doing with my stuff. Lady in Red said, “We need to get a phone, but not his. His phone is tainted.” They then scurried off towards the parking lot.

I couldn’t believe what just happened. I messaged the vid to my wife and sister back at the beach house, just the video without a message. The way the video ends I can now understand their concern. They told me they got in the car immediately and called the police right away. My wife, sister, and niece arrived a few minutes later, Beach Patrol a few minutes after that.

I explained that nothing was taken and the “assault” didn’t warrant filing a police report or pressing charges. The Beach Patrol Officer explained that this never happens in New Smyrna Beach, which I agree with wholeheartedly. The 4th of July holiday brought out large crowds of beachgoers and a few bad apples had less than the best intentions. We’ve definitely learned that you shouldn’t leave your belongings unattended, even in Mayberry.