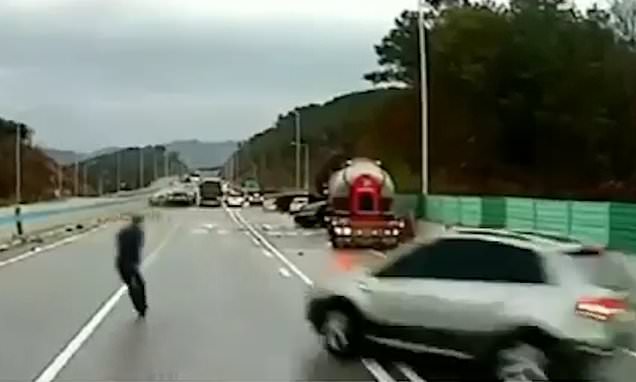 How did he survive this 20 car pileup?

It’s not an easy decision whether to stay in your car or not during a multi car pile-up on the motorway, but I think we can all agree legging it across the road is the last thing you should do.

For some reason this man in Seoul, South Korea, thought it would be a good idea after black ice caused around 20 cars to career into each other at the intersection of the Dongyangpyeong Expressway and the Gwangju Wonju Expressway, resulting in three serious injuries.

And this man’s death, almost:

What was he thinking? It was like he just saw a multiple car pile-up on the motorway and thought oh I know, I’ll play ‘chicken’. Major respect to the driver of the silver SUV for somehow not hitting anything while bringing his car under control – I keep watching the video and have no idea how he did it.

As for the man whose entire life flashed before his eyes (twice) you can bet he’s going to have himself the best Christmas ever. In fact he’s probably already spent every day since drinking and eating whatever he wants because he somehow survived multiple cars driving right at him at high speed on the motorway. That’s the sort of thing that will give you a new lease on life indeed.

For the horrific footage of a woman falling 50 feet down a waterfall with a GoPro attached, click HERE. She somehow survived too.