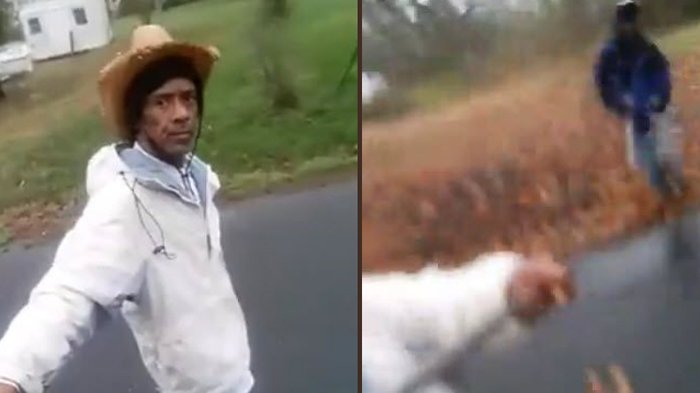 He was shot four times.

Birthday celebrations are supposed to be joyous occasions, celebrating amongst family and friends, but unfortunately it doesn’t always turn out that way as the video below shows us.

In the video, a musician from Wingate, North Carolina named Prentis Robinson is celebrating his birthday by making a Facebook Live video of himself walking around a rural road in the area. Not sure if that’s really a great way to celebrate your birthday to begin with, but things take a bizarre and tragic turn for the worse when a guy approaches him in a blue jacket and then fires four shots at him.

The Facebook video cuts out at this point, but you can see the moments preceding it here:

Damn. That is some disturbing footage. RIP Prentis Robinson.

Right now, nobody really knows what this guy in the blue jacket was all about and what he was doing, but it seems unlikely that this was just a random killing considering the circumstances. Union County Sheriff’s Office are trying to get to the bottom of it though with spokesman Tony Underwood saying:

We’re pursuing leads and trying to figure out what this is all about.

Sounds like they’re definitely on top of this one guys. Apparently Prentis was well known in the area for reporting drug dealers to police, so it sounds like in serious they probably do have a few leads and there wouldn’t be a shortage of people that would want him dead. Looks like they managed to achieve that.

Anyway, the true horror and sadness of this event shouldn’t be taken lightly, with many of Prentis’ friends and fans literally seeing him gunned down on his birthday. That’s not something anybody wants to see ever, especially someone who as well known and liked in the community for regularly live streaming. RIP again and let’s hope the killer is found and suitably punished.

For more of the same, check out this guy shooting himself in the head on Facebook Live. Grim.