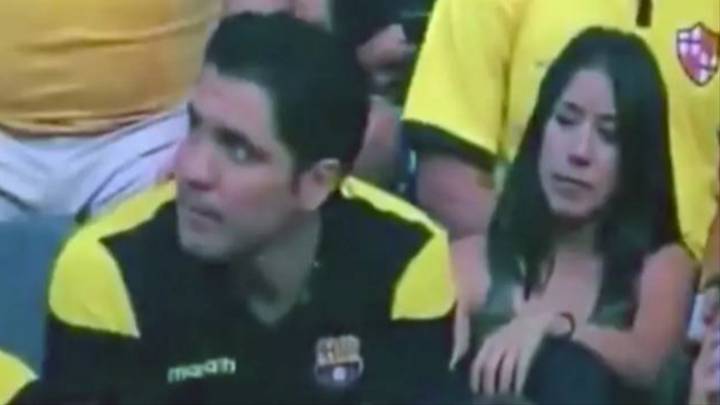 We all knew it.

One of the most recent videos to go viral was the one of the man kissing his girlfriend at a football match, but then immediately pushing her away from him when he got papped on the big screen.

Obviously the nature of this video led to its virality and we were all pretty much convinced that the guy had been busted cheating on his girlfriend in the video. And guess what? We were 100% correct as Deyvi Andrade has come forward to admit that this was exactly what was happening in the video.

Here’s what he had to say about it in an official statement:

If it was a woman was in my place what would you do?

Various videos have been circulating of unfaithful women but they haven’t been made fun of as much as me. I hope you never have to be in my position.

I’m going to defend my honour and my pride as a man until the end… We all fail and we all repent, thank you to those who have invited me to church and if I go it is so I can heal my family.

No one is going to be able to damage my image, God is big and strong and these women who are criticising me, I know too have cheated but they still comment.

You’ve already destroyed my relationship, what more do you want? I hope this doesn’t serve you in any way because you are only hurting a son of God.

You don’t know the psychological damage you have caused with your hatred directed at me. Everyone fails and we can forgive from our hearts. God give me strength!

Er you ok there mate? Maybe some of this is lost in translation – the guy is Ecuadorian – but even so I don’t really think this is the right kind of reaction? He seems to be having a go at all the women who are leaving him comments and accusing them of being cheaters as well?

That really is a bizarre reaction to this incident, as there’s not really any evidence of that and there’s a viral video of him cheating that’s been viewed about 22 million times here. Not really sure what he’s trying to achieve there except making people dislike him even more. Really dumb idea.

For more of the same, check out this girlfriend getting brutal revenge on her man when he refused to kiss her for the kiss cam. Just don’t do it guys.