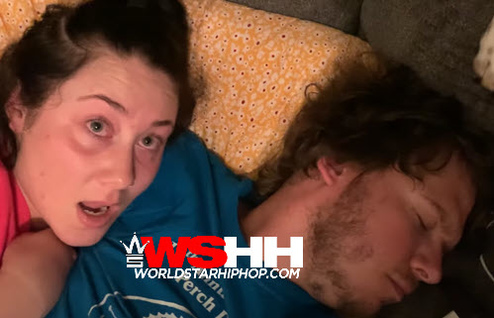 There’s no context around this clip available other than what you see in the video – that this man has walked in on his wife (who I sense he’s already on bad terms with) cheating on him with his best friend, who it turns out is also cheating on his fiancee.

The best part about the video and the only reason I’m sharing it though is because of his best friend’s A+ reaction to being caught banging his buddy’s wife – he pretends to be asleep:

Laugh out loud funny. Best friend walks in on him shagging his wife and he manages to avoid the whole confrontation by doing the only thing he could think of doing in that moment – pretending to be asleep. Even with that dude screaming the house down, his wife calling the police, dogs running around etc. It’s genius! Next time you’re ever caught red-handed doing something you shouldn’t be doing or faced with an uncomfortable/awkward reality, just do what this guy did and pretend to be asleep. Boom – problem solved.

TBH though I’m not sure what he was afraid of considering his buddy didn’t immediately beat him up and even said “it’s not that big of a deal”, but I guess it’s just the awkwardness of it all. Why explain yourself to your cuckolded best friend when you can just pretend to be getting some shut-eye instead? Like I said – genius.

To watch a girl confront her best friend out of nowhere for shagging her boyfriend, click HERE. Awks.