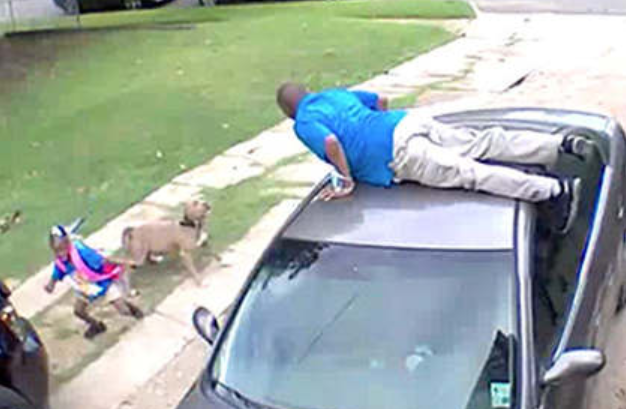 What’s the opposite of dad goals?

Although most pitbulls just want your love and affection, it’s still pretty terrifying to see one running at you full-pelt, especially if you’re not a dog person.

But what if a pitbull was coming at you and you had to choose between saving your own life or your daughter’s life? It’s a no-brainer, right? Welp, not for this guy:

I don’t think he could have pooped his pants any harder if he tried. What would he have done if the dog actually got a hold of his daughter? I’d like to think his dad instincts would kick in and he’d drop down to the rescue but I’ve got a feeling this guy is so terrified of dogs that he would have just stayed frozen on top of that car while his little girl became dog food. Pretty poor tbh.

I mean come on, even Homer Simpson did better in a similar situation:

Luckily, it looked as though the dog just wanted to say hello. Still, very lame of the homeowner to not take precautions seeing as she knew the dog was capable of slipping through the gate. Wonder what effect this incident will have on that little girl’s perception of her dad? Not exactly the ‘protector’ image you want from your old man at that age.

For the Mexican gang who had a man castrated via pitbull as revenge for raping a woman, click HERE.