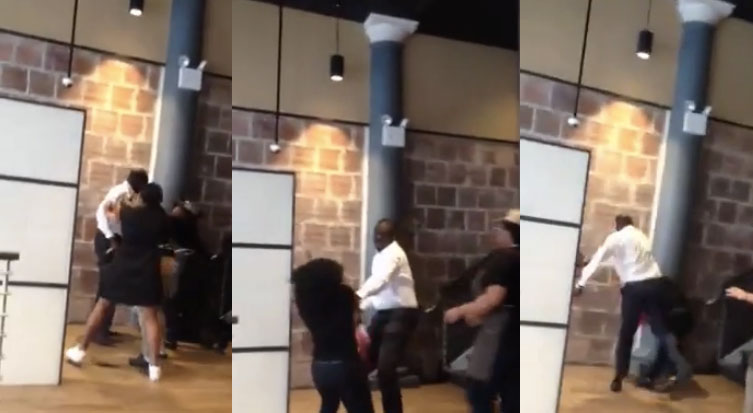 We walked in, in the middle of her quitting her job mid shift. She was yelling at a different manager than the one who hit her and was throwing some bags of chips on the ground, threatening to turn up in this bitch, etc. Really nothing I haven’t seen before or wouldn’t expect from someone who has to work at a fucking Panera all day.

Then out of nowhere white shirt manager approaches her and immediately gets physical with her, keep in mind she’s about 5’2 at most and he was bigger than me… He legit threw her down a flight of stairs and out the front door for really no reason, she runs around to the other entrance to retaliate and that’s where the video starts. You might wanna say she hit him first, but really he had FULL CONTROL over her the entire time, was throwing her around, I think she gets one slap in that was louder than it was painful, then he half punches her once, she spins, and then he REALLY FUCKING PUNCHES her. You can even hear me and my friend yell DON’T HIT HER just before it… I checked on her for a while after the cops left, she seemed ok, she kept saying he really got her in the ear mostly which I know stings like a bitch. She was bleeding a little, and had cuts on her hands but she seemed ok after the adrenaline wore off.

Ouch. I know some people will stress that she hit him first but really, like the uploader says he had full control of the situation being twice the size of her and didn’t really need to swing. But I guess this is a perfect example of someone just snapping and not thinking straight. Having her scream in his face like that probably filled him with flashbacks of all the times she wound him up in the past and he just couldn’t take it anymore.

Would have advised she go for the groin kick special – but that didn’t turn out too well the last time someone tried it.