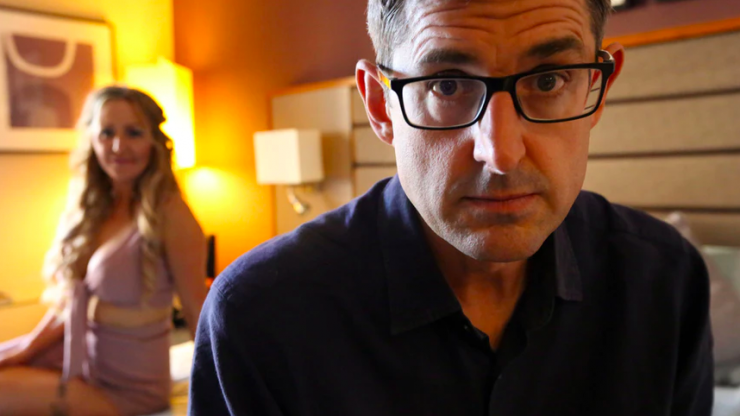 Start the new decade hopefully as you mean to go on, with a brand new Louis Theroux documentary airing on BBC 2 this Sunday, January 12th at 9pm.

The new documentary examines the subject of prostitution in Britain in the 21st century, where the exchange of money for sex is legal. Louis however is more interested in looking into the heart and motivations of those involved in the sex industry, saying the following about the programme:

I’m always drawn to stories that involve ethical wrinkles – issues that are deeply felt, but are also divisive, and in which good-hearted people can come to opposite conclusions. The debate around selling sex is exactly that kind of story.

It is one of the most straightforward, yet complex interactions that can take place between two people. On the one hand, none of the activities taking place here are illegal; everything is above board and both parties have mutually agreed on the arrangement.

On the other, it’s impossible to deny that for many – maybe most – people, there is something unsavoury in the idea of accepting money for an act that is so intimate. They have a problem with those who do it and see it as a symptom of a society that is controlled and dominated by men.

For exactly this reason – because it is so controversial – I thought it would be revealing to speak to the women involved in the business of selling sex. Once we started looking we discovered that the sexual economy seems to have been turbo-charged by the prevalence of new websites and social media that allow users to meet up more easily, to write reviews of each other, and swap information.

What we ended up with was a very intimate look at three very individual women and the different paths that led them to this field of work. I found it revealing and thought-provoking to make – I hope viewers have the same experience.

Sounds fair enough and like it’s going to be a great watch, but interestingly two of the sex workers featured in the show have already posted an open letter about it on Twitter as far back as September, claiming that the documentary team completely underrepresented and manipulated their narrative. Have a read:

Open letter to the BBC as a “participant” in this documentary: a thread! pic.twitter.com/NDatofhBFp

Geez, that isn’t good. It’ll be interesting to see what this pair make of the final edit of the documentary that airs on Sunday, but I doubt that they’ll be happy with it given the extent of their comments here. Bear that in mind when you’re tuning in on Sunday.

For more of the same, check out what Louis Theroux’s next documentary after this one is going to be about. Sounds a little less controversial.