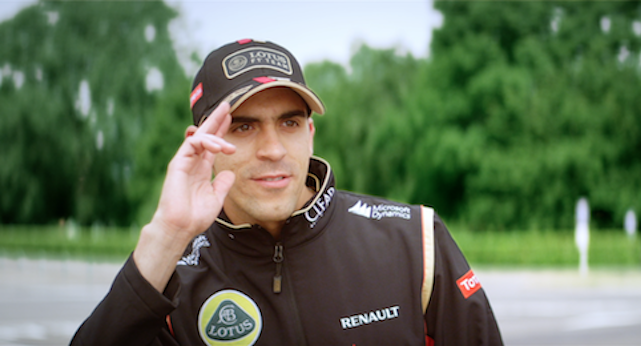 By hook or by crook they’ll get it.

You expect F1 drivers to be a competitive lot – hell they spend all their time racing around a track over and over again at high speeds trying to overtake each other – but I didn’t think that this would run to something as routine as getting a space in a car park.

That’s exactly what happens for the Lotus F1 team though – especially when they’re powered by burn energy drink – in this new advert promoting both brands starring Romain Grosjean and Pastor Maldonado and a special mystery guest. Romain is driving the Lotus Exige LF1 like a badass – just drifting it around like you can when you’re an F1 driver, when he spots that the coveted LF1 space has already been taken by a former employee.

Not happy about this, Romain attempts to use all his skill and guile to get into the space, only to be outwitted at the last minute by Maldonado. Trust me, that’s gotta hurt, but I’m sure Romain is already thinking up some crazy scheme to get him back. All these F1 drivers are massive jokers you know. It might be easier if the team installed women’s only parking spaces for them.