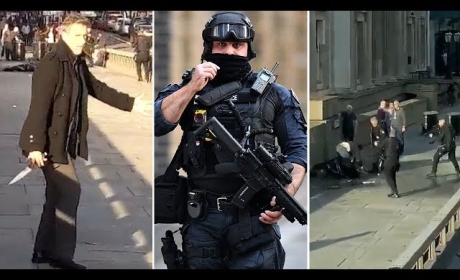 Every time there’s some kind of major terror incident you always get the tin foil hat brigade coming out and putting the dots together and claiming it’s some kind of inside job/false flag to further a political motive.

Unsurprisingly, the same is being said for the London Bridge terror attack yesterday which saw convicted terrorist Usman Khan, 28, shot dead by police after stabbing several people while on parole after spending eight years in jail for terrorism offences.

Some think it’s too big a coincidence that this terror attack happened so close to the December 12 general election, and are speculating the Tories somehow set it up to get a terror threat narrative going and ensure more votes.

Again just before the election. I’m not into conspiracies but this coincidence is hard to ignore. False flag from the Tories?

Hi. A group of us said exactly the same thing. Be more afraid of this government because there is a rabbit off here. There is always some sort of incident or terrorism exactly the same time before these elections.
Maybe Tories are trailing behind too much for their liking.

Last time it was shortly after the conservatives had a huge blowout on social media which was swept under the rug…this morning @BorisJohnson made a fool of himself on LBC. What great timing for him.

Why does this whole London Bridge “major incident” look and play out like another false flag operation?

As soon as the BBC say our journalist just happened to be on London bridge when shooting started , i think false flag

Is the London Bridge False Flag suspect dead yet?

The Manchester Arena bombing and 2017 London Bridge attack both happened right before the 2017 General Election. Conventional wisdom says that terror attacks raise right wing votes. There were no terror attacks in the UK since then until today. MI6 false flag

Its showing WHO is controlling our media….. It’s disgusting. Politics should NEVER be dirty! The minute it is it isn’t fair and trustworthy. ALSO the false flag event in London JUST before election. THEY’RE getting desperate to stay in power

Could it be that the periods before major elections are seen by terrorists as prime opportunity to maximise headlines/cause extra distress and controversy around elections? Or should this idea that Boris Johnson and the Tories somehow set this up to swing the election their way be taken even 1% seriously? Personally I think we should be asking why the fuck a man convicted of plotting a terror attack in 2012 was freed after just EIGHT YEARS to commit another terror attack.

I guess we’ll have to wait for Alex Jones’s take on it – he’s always got something sensible to say about these things, right?