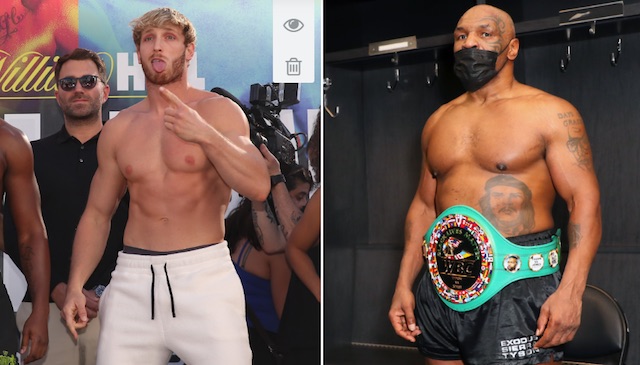 A lot of people were surprised a couple of weeks ago when Logan Paul managed to go eight rounds with Floyd Mayweather without getting knocked out – although it seems clear from what I’ve read about the fight that Floyd wasn’t really trying and they spent most of the fight hugging it out (I’m not dumb enough to actually watch that shit) – and so now Logan Paul’s head is up in the clouds and he reckons that he can batter Mike Tyson.

Paul was talking on his podcast when he mentioned the possibility of a bout with Tyson, saying the following:

Someone mentioned Mike Tyson. My lawyer mentioned it and he’s like, ‘Nah, Tyson will rip your head off, you don’t stand a chance.’

Lol OK Logan Paul. Mike Tyson might be old but in his recent exhibition bout with Roy Jones Jr he tore it up and quite clearly won the match (there were no rules so no official winner was declared) and quite clearly still has it. Would love it if the powers that be actually made this happen because there’s much more of a chance of Logan Paul getting knocked out than against Floyd because Tyson is still an animal and would absolutely go for it. Please, please let’s get this going and see the smirk clearly wiped off that little asshole’s face.

For more of the same, check out when Logan Paul gave the most bizarre interview of all time on Fox News. Yes, even worse than these claims.