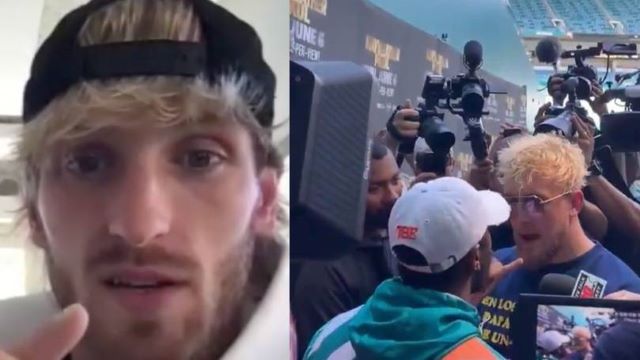 Logan Paul is afraid Floyd Mayweather is going to hire people to kill him.

Logan Paul says that he and his brother are taking no chances following Floyd Mayweather’s “I’ll kill you” threats after the infamous ‘Gotcha Hat’ incident – telling TMZ they now have security watching them “at all times.”

Floyd gave the warning on camera after being infuriated by Jake Paul snatching his hat during a confrontation at the Logan-Mayweather pre-fight news conference in Miami last week. Logan and Floyd are due to fight on June 6th.

Would Floyd really have one or both of the Paul brothers killed over it though? Logan seems to think so:

Dawg, when you have a guy with the resources and the wealth that Floyd Mayweather has and the connection and the network and he’s saying s***, ‘I’mma kill that motherf***er’ — kill?! Death?! You’re gonna kill my brother over a f***ing hat?! Yo, we take that s*** seriously man!”

Well I’m not sure how serious he’s being there but he’s right about one thing – if Floyd Mayweather really wanted the Paul brothers dead, it probably wouldn’t be too hard to arrange. Only problem is everyone in the world would immediately point the finger at him because he literally announced he was going to do it on camera. Which is the exact sort of mistake you’d expect Floyd Mayweather to make, to be fair.

Somehow though, I think Floyd is going to let the Paul brothers live until at least the day after their fight on June 6th. Apparently they’re expecting to make $100 MILLION out of the fight, which means there’s more than a slight chance all these altercations and arguments and death threats are a WWE-style part of the build-up. As long as the fight itself is for real though, I’m all for it. Although it’s annoying to think Floyd will probably dance around him 10 rounds and “put on a show” instead of just destroy him inside the first. I hope he does the latter though.

For a look at the injuries Jake Paul was left with after stealing Floyd’s hat, click HERE.