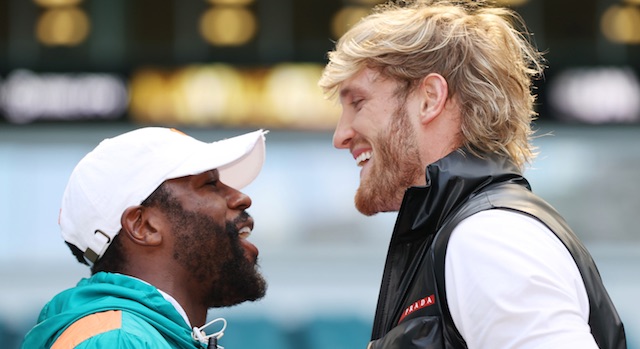 The long awaited (?) fight between Floyd Mayweather and Logan Paul is finally set to take place this Saturday, so obviously the pair of them are going into overdrive this week with the dumb sound bytes to get everyone hyped and push that buy rate through the roof.

Naturally, Logan Paul is coming out with the dumbest crap out of the two of them with this little quote easily being the piece de resistance:

He doesn’t know who he’s getting in the ring with.

Floyd underestimating me is going to hurt him, I think.

I want Floyd to bring his belts, all of them because I’m going to knock him out and become the greatest boxer on the planet.

Then I’m going to retire, buy some land in upstate New York and not give Floyd the rematch.

Wow. Really does sound like the guy is living in cloud cuckoo land, but I suppose you have to be as full of yourself as possible going into a fight and he’s certainly living up to that stereotype.

Not sure if that’s gonna get people buying the PPV, but I suppose a lot of people will want to see the cocky little idiot get knocked out in round one, although you might wanna be a bit careful about that as because it’s an exhibition match I’m pretty sure they won’t even be allowed to knock each other out. Logan Paul himself has admitted he doesn’t even know the rules. You gotta be a major idiot if you’re actually considering spending money on this crap.