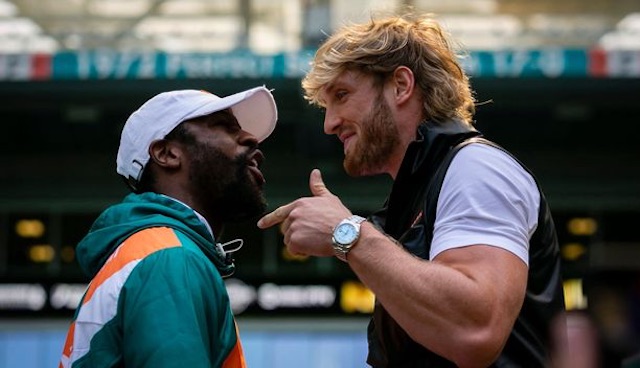 I’ll be the first to admit that Jake and Logan Paul are two of the most annoying people to ever set foot on the face of the planet, but I gotta say that their trolling of Floyd Mayweather yesterday during the press conference to promote Logan’s fight with him was A+.

Not only did you get Jake Paul stealing Floyd Mayweather’s hat – very very funny – but you also got to see Logan Paul trolling him about his history of domestic violence. I don’t even think Conor McGregor brought that up during their super fight a few years ago and given that Conor is one of the kings of trash talk, that’s no mean feat.

Lol. Obviously there’s nothing funny about domestic violence and the fact that Floyd Mayweather 100% kicked the shit out of his ex wife and a couple of his former girlfriends, but what is funny is that it’s kind of been swept under the carpet and forgotten as Floyd is so powerful in the fight game that nobody wants to risk pissing him off and screwing up their careers. The fact that Logan Paul doesn’t give a fuck and is actively calling him out about it is absolutely 10/10 and has actually made me like the guy which I never, ever thought was possible.

One thing is for sure though – Logan is 100% going to get the shit kicked out of him when they come to fight each other on July 6th. Maybe it’ll all be worth it and people will finally start waking up to the fact that Floyd Mayweather is a gigantic piece of shit that beats up women and stop paying him ridiculous amounts of money to beat up losers like Logan Paul. Probably not though. Pretty sure that isn’t Logan Paul’s goal anyway, but it would be a nice side effect from it.

For more of the same, check out Mike Tyson explaining to Logan Paul why Floyd Mayweather is gonna kick his ass. It’s so obvious.