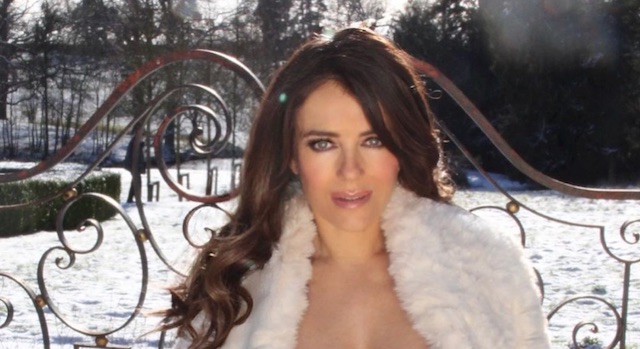 Liz Hurley has never been one to shy away from controversy or the limelight, so it’s hardly surprising that she decided to break the internet when it snowed on Sunday by posting up a topless picture of herself in bikini bottoms and a coat, hanging out in her snow covered garden onto her Instagram account.

Weirdly enough, Liz also revealed that her 19 year old son Damian had taken the photograph for her, in a move that has led Piers Morgan to label her ‘thirsty and creepy’ on Good Morning Britain today. Here’s what the outspoken presenter had to say about her sexy photoshoot:

Yeah, she looks fabulous, but what are you doing Liz? A bit of snow and you get your kit off…

I guess Piers does have a point there that it’s a bit weird that her son takes pictures of her like that, but this kind of behaviour is exactly what you expect from Liz Hurley, so I’m not really sure why he feels the need to call her out about it. Would be weirder if she didn’t do anything similar to this because literally all of her content is her posing in skimpy outfits looking sexy. And her son does take a lot of a her pictures as well which I will concede is a bit creepy, but even so chill out Piers. Let her do what she wants.

For more of the same, check out this slow motion video that Liz Hurley posted back in 2017. Definitely still got it.