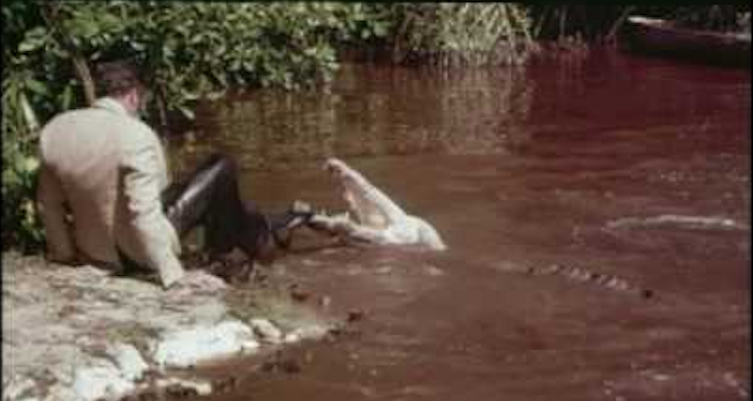 Live and Let Die was a sick Bond movie because of that part where he runs across the crocodile’s mouths, but the guy who performed the stunt had to do it a whole bunch of times before he got it right, and those crocodiles didn’t take too kindly to him.

When I was a kid my favourite James Bond film was definitely Live And Let Die because Baron Samedi was super creepy and because I thought this scene where James Bond runs across the crocodiles mouths to get off some island that he’s been stranded on (I think he’s actually going to be eaten by the crocodiles or something if he stays there) was the sickest scene in movie history. Looking back at it now, it obviously isn’t that good but this behind the scenes look at it is pretty sick. It turns out that they had to use real crocodiles back then – I don’t know how I thought that they would have done it as I’m pretty sure they didn’t have CGI or animatronics back then, I guess I had just never really thought about it before – and the stuntman obviously didn’t get it right first time and had to  go back and do it a bunch of times.

In this video, you get to see all those failed attempts and it looks pretty frickin’ painful/scary. Ross Kananga is the guy’s name and for the most part he nails running across the crocodile’s mouths, it’s just the bit at the end where he has to jump onto the land that he keeps screwing up. He screws it up so bad he looks like an extra from Takeshi’s Castle – you know that challenge where they run across the lake but some of the stepping stones aren’t solid so they lose their footing and smash their faces against another stone? It’s pretty much like that only way more hardcore because he’s running over crocodile’s mouths not stones. There are a couple of attempts too – notably the third – where he falls in the water right in the middle of the crocodiles and they’re swarming around him, ready to snap which are pretty scary and what we really want to see here. a couple of them snap at him but he never gets bitten or anything, which I’m sure you’ll agree is pretty disappointing.

It doesn’t change how cool it is watching this dude run across the crocodiles though.To be honest it’s pretty impressive he kept coming back to do it so many times considering how fvcking terrifying it must be to be walking across crocodiles all day, especially when they’re taking snaps at you a bunch. Check the video below: