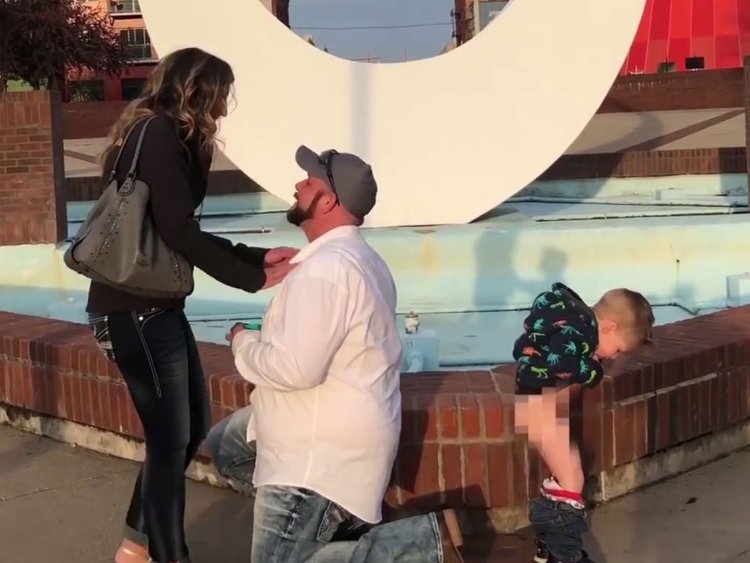 Couldn’t have planned it any better.

A wedding proposal should hopefully be one of the most romantic and loving moments of whoever’s involved in it’s life but sometimes other people manage to get in the way and screw it all up and I don’t think there’s a more perfect example of this than in the video below.

33 year old Kevin Przytula was all set to pop the question to his 27 year old girlfriend Alyssa Anter in Bay City, Michigan and had his 11 year old daughter all set up to record the beautiful moment. Unfortunately for all three though, they weren’t counting on the impact of Alyysa’s son Owen who decided that he needed to go to the toilet just as Kevin went down on one knee.

As such, what should have been a beautiful moment turns to comedy as the proposal is overshadowed by Owen peeing all over the street next to it:

Nope, you can’t really get much better than that. Neither bride nor groom to be seemed too worried about this though, as Alyssa said the following:

He stole the show, for sure.

He pees outside at home sometimes in the yard, and we went and got ice cream the other day and he did it in the parking lot there.

He just does it without telling anybody, he just pulls his pants down and goes.

Sounds like a problem they might want to try and sort out before the big wedding day. To be honest they’re probably pretty stoked that this even happened at all because it’s probably going to make the wedding way cheaper as the video went viral and made them a boatload of money. Probably staged it to be honest.

For more peeing, check out this woman peeing on a war memorial. Not cool.