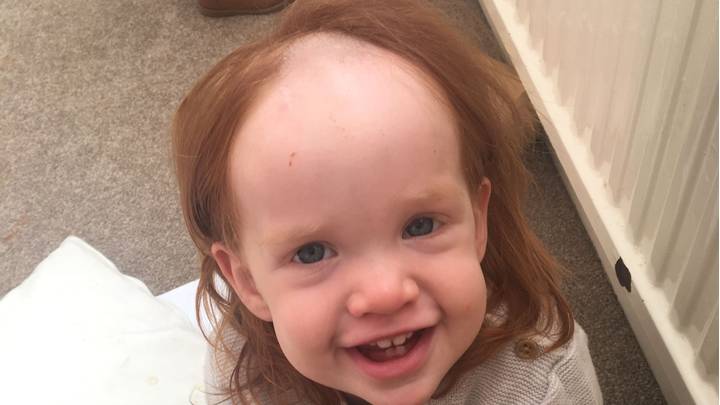 Everyone knows that young kids get into all sorts of weird scrapes and problems because they literally have no idea how the world works whatsoever, but usually it’s not quite as a horrific experience as the girl in this article’s, as she smothered hair removal cream all over her head and ended up looking like Pennywise the clown from ‘It’. Oh well, I suppose it will at least make a good Halloween costume?

The whole way that it happened seem like a major screw up on more than one occasion too. Maisie Saward’s older brother managed to accidentally leave the baby gate open, meaning that she figured out how to get into the family bathroom. Once in there, someone else had left the car removal cream in reach and this meant it was only too easy for her to grab it and then squeeze it all over her head.

Her father Luke realised what had happened as soon as he saw her, but it was too late to save her and she now looks like everyone’s favourite scary clown. Her mother Kirstie was horrified when she first saw her but has since seen the funny side thankfully: 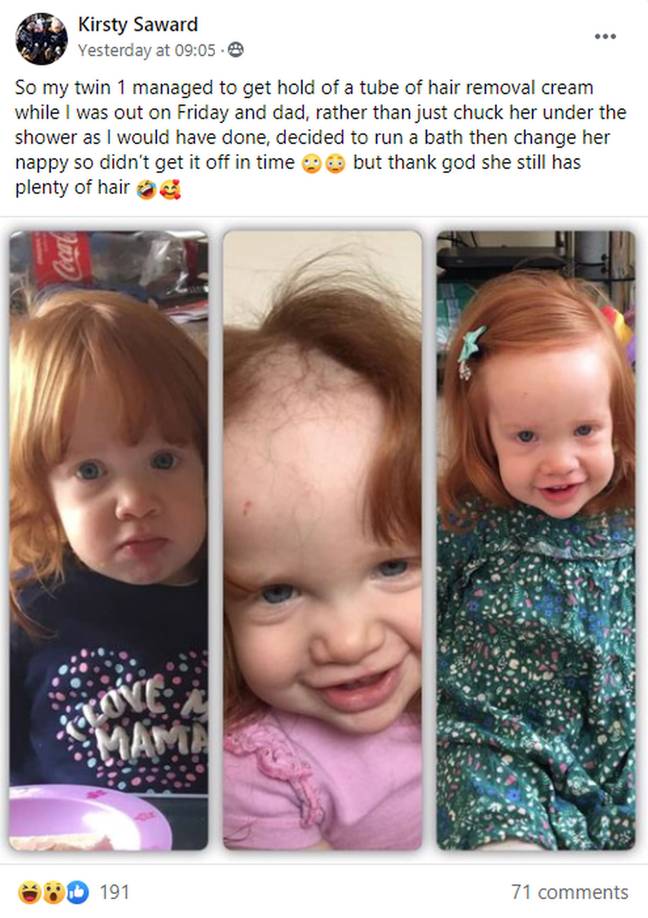 I’d called Luke and he said, ‘Maisie’s got no fringe left,’ but the phone broke up, so I just thought she’d got hold of some scissors.

When I got home I was just in pure shock. She came and gave me a cuddle and I just cried for an hour because I absolutely loved her fringe.

Rather than just shove her under the shower, [Luke] ran her a bath, got her changed and it took about 10 minutes before he even thought about taking it off.

If I hadn’t been out for so long, maybe I’d have been able to deal with it myself. I didn’t speak to him for a couple of hours, but the next day I started to see more of the funny side.

Maisie found it hilarious and she still does. She was born with a full head of hair, so she’s never been bald. She keeps finding different surfaces to rub it up against because it feels funny.

When she gets tired, she rubs her bald patch, and every time I go to take a pictureshe bends her head down so you can see it. She’s loving it.

Someone even said we should dress her up as Pennywise for Halloween.

That would have been a good idea if we could go trick or treating, so we enjoyed laughing at that.

Geez, sounds like Luke is a bit of a dumbass there – why the hell would he not just stick her immediately under the shower to wash it out? Or maybe that was all part of his plan to ensure that Maisie had the best Halloween costume of the year?

Can’t really believe that someone would wait ten minutes to wash their kids’ hair out after they had got hair removal cream all over it. Seems awfully negligent and naive, so the only explanation for me is that he was desperate to win Halloween costume of the year. Think he’s got a good chance at it as well.

For more of the same, check out this 6’5″ animatronic Pennywise you can now buy. Terrifying.