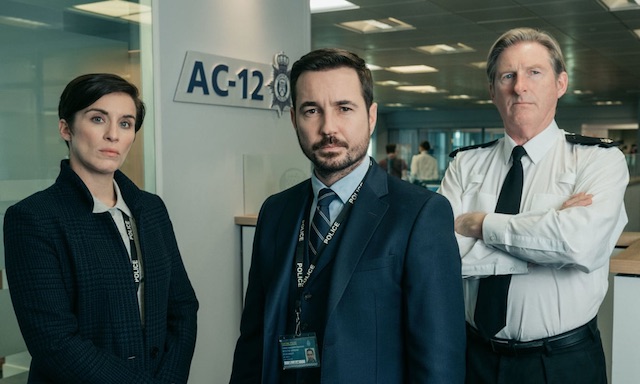 It’s all coming together.

Obviously this article is going to feature huge spoilers from the ‘Line Of Duty’ finale, so if you haven’t watched it yet then it probably makes no sense to read it. Up to you though.

Anyway, the majority of the nation tuned into the finale on Sunday night and judging by the social media reaction, pretty much everyone was disappointed with the ultimate reveal that Ian Buckells was the elusive H at the centre of police corruption. However, series creator Jed Mercurio has come up with a bit of a humdinger when he revealed that he pegged Buckells as H as far back as series 1 of the crime drama, pointing out the moment in that season where he lets bent copper Dot Cottan speak to prisoner Tommy Hunter without a second thought:

Wow – there you have it hey? It really had been planned from the start.

Well, maybe. Mercurio even said the following on the ‘Obsessed With Line Of Duty’ podcast on BBC Sound which kinda implies that this might not have been the case:

It was really about the heritage of the series, going all the way back to season one, where Dot Cottan says, “Oh, can I just have a quick word” with Tommy Hunter in the back of the van.

I suppose (the reason people weren’t happy with it) was really down to the decision to kind of hold him to account mid season.

There were suspicions around him in the first few episodes, AC-12 get him in and they charge him, off he goes to prison and it feels like he’s done and dusted.

And I think that if we kept him as part of the action all the way through, then it would have been very hard to misdirect the audience, so we were trying to present other candidates to take the kind of focus away from him, but it was always really important to me that it was someone who’d been in season one – someone who’d been there the whole time.

Yeah, not really sure if he’s been planning that from the start and kinda sounds like he just fitted it around what was happening, but I think crucially it did all make sense and even though it was a bit underwhelming, I liked how they kept it realistic and didn’t make it overly dramatic. Maybe I’m in the minority there, but in any case, it seems almost certain that there’s going to be another season – there are still a few loose ends to tie up. Trust me.

For more of the same, check out when series 6 was flooded with complaints after a character with Down’s Syndrome was classified as an oddball. Gotta be more careful about that stuff.