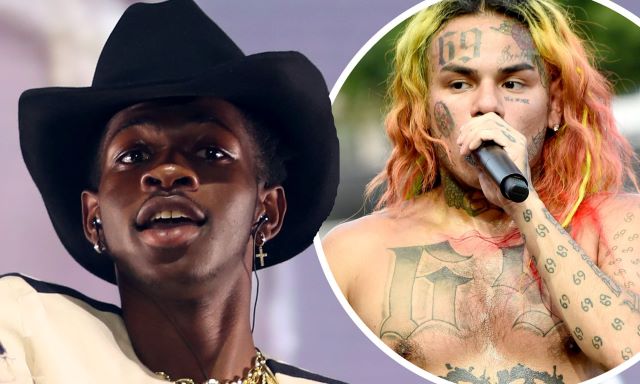 They say all the biggest homophobes are merely suppressing their own desire for cock, and Tekashi 6ix9ine may have proved that this week after making a homophobic joke at famously gay rapper Lil Nas X’s expense.

Lil Nas X responded by sharing a screenshot of his DMs with Tekashi, clearly showing the rapper first messaging “Yo”, and then later “Gonna be in ya city soon what you doing lol?”

Yikes! How did Tekashi not see this coming? Did he forget he sent those DMs or something? Well actually, according to him, the DMs have been Photoshopped! He quickly shared this video of himself ‘proving’ there’s been no DM exchange between the two:

I— always knew there was something “colorful” about him. 😂😂😂😂 pic.twitter.com/f3MYdvKNJm

I love how he’s acting like you can’t delete messages on Instagram, and so somehow this is proof he never DM’d Lil Nas X in his life. Who knows though? Maybe Lil Nas really did fake the DMs, or maybe Tekashi really is a closet homosexual. Which would actually be the perfect next chapter in his story considering the ‘snitch’ tag that’s been following him around the last couple years. What better way to take the heat off than to come out as an openly gay gangster rapper? Lil Nas X tried to give him the lay-up here but Tekashi did not take it. Just scrambled to get on Instagram and deny it straight away. Oh well, he’ll let us know when he’s ready.

To watch Chicago rapper ‘600 Breezy’ join Tekashi’s live-stream and promise to kill him in cold blood, click HERE. That’s one way to put yourself on a watch list.