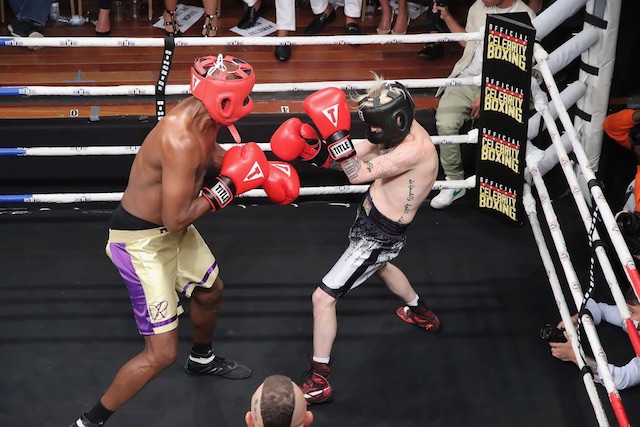 He got absolutely battered.

With all the excitement around the European Championships and all the other dumb celebrity boxing that has been going on over the last couple of weeks, it had completely slipped my mind that Lil Aaron Carter was facing off against former NBA player Lamar Odom on Friday night.

I doubt that I would have tuned in but obviously I wanted to see the highlights because it was a completel mismatch – Odom had something like a ten inch reach advantage over Carter – and Carter was going to get his ass absolutely handed to him and this is exactly what happened. He was knocked down in the first round and then KOed in the second and pretty much manhandled in between all that, revealing later on that he was so beaten up by Odom that he suffered a mild concussion:

Lamar Odom with the first round knockdown of Aaron Carter pic.twitter.com/Ulh6A1ShW2

Lamar Odom wins against Aaron Carter with a second round KO pic.twitter.com/0o3FcJmPX7

Let me guess #aaroncarter I predict you will have “brain cancer” from this fight? 🙄 pic.twitter.com/grVCD2f4Yn

You win some, you lose some. But you live. You live to fight another day 😜 pic.twitter.com/VhstlJozky

I got punched in the throat so hard lol that shit was so much fun!!!! I actually had a blast so y’all can say what you want. But I don’t see you at 6’ fighting a giant. Takes a bow*

I did my best. Fought like a lion. He was huge. And at least I didn’t go in their like a pussy 😊 pic.twitter.com/21jICJJ7Gt

Yeah that really was kind of embarrassing for the guy wasn’t it because he’s so much smaller than Odom. It makes you think why they even bothered to have the match in the first place as it clearly wasn’t that much of a competition. I guess for the memes, but did anyone really think that Aaron Carter even had a slight chance in this? Was like Rey Mysterio vs The Big Show or something.

For more of the same, check out when Aaron Carter got a huge tattoo of Rihanna on his forehead. That was weird.