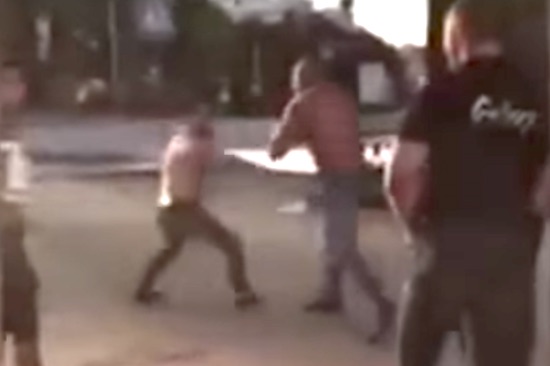 There seems to be more and more of a consistent narrative of people getting in fights with MMA fighters – even just amateur ones – and getting their asses completely and utterly handed to them, and this is by far and away the most devastating video we’ve ever seen in this context.

The video was taken in Russia and features a champion powerlifter getting into a scrap with an MMA fighter in the centre of Khabarovsk at 7am, presumably after a night of drinking.

The MMA dude connects perfectly with a spinning roundhouse to the head of the much bigger powerlifter, knocking him clean out. He follows up with a few punches to the head MMA style whilst he’s on the ground before being held back, but shockingly this was enough to cause the powerlifter’s death. He was announced dead at the hospital a few hours later. RIP.

Take a look at the news report about the fight, but it’s kinda upsetting so you’ve been warned:

Geez. I guess it goes to show that you should never pick a fight with an MMA fighter unless you know what you’re doing, because you could end up with the crap kicked out of you or even dead.

The guy who kicked the powerlifter has been identified as Anar Allakhveranov, and he’s now on the run from the authorities who are looking to arrest him for murder. Doesn’t look like this story turned out too well for anyone, so I guess the moral would be just to not get into fights full stop. You heard it here first.