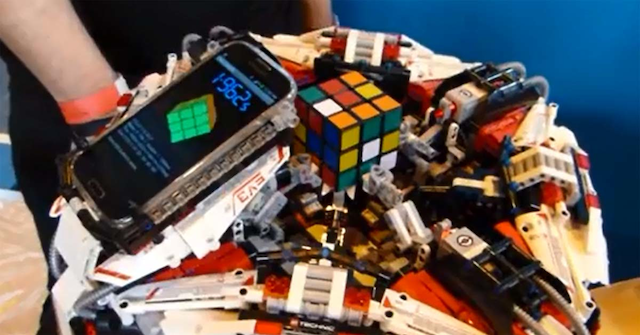 Destroys the human record by amazingly solving a Rubik’s Cube in about three seconds.

Robots took another step towards world domination and destroying their puny human masters over the weekend as one completely smashed the Rubik’s Cube world record at a technology fair at the NEC arena.

The robot is powered by a Galaxy Samsung S4 phone which photographs the cube and then computes the oat efficient way to solve it via some kind of algorithm. The machine was created by David Gilday and Mike Dobson, so we know who to blame when robots get so smart that they completely fuck us up. Gilday had this to say bout the robot:

‘The new robot can think three times faster than its older brother. The record-breaking attempt is a bit of fun for us. Our real focus is to demonstrate what can be achieved with readily-available technology to inspire young minds into taking a greater interest in science, technology, engineering and mathematics.’

The attempt was overseen by Guinness World Records editor-in-chief Craig Glenday who promptly gave them the official seal of approval. You can see a video of the record breaking robot below: