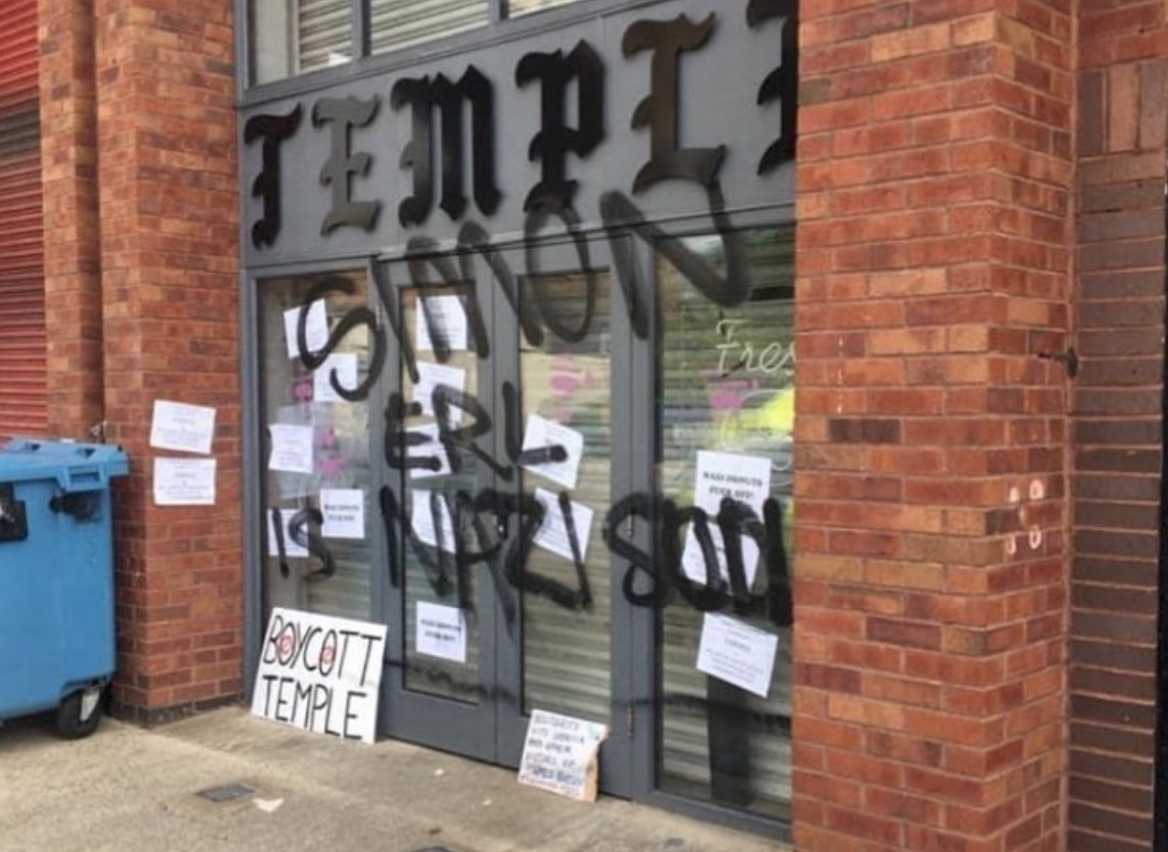 The Black Lives Matter movement has dominated the news for the past couple of weeks after the death of George Floyd and many organisations and businesses have been called out for their racism, but this story coming out of a Leeds vegan donut shop is definitely the most surprising one I’ve seen so far.

Vegan restaurants/donut shops/whatever are normally built on the ideas of kindness, inclusivity and activism, so it’s somewhat of a shock to discover that the owners and managers of Temple Coffee  And Donuts up in Leeds have been exposed as Neo-Nazis, racists and homophobes. The accusations began when a former employee spoke about being racially abused during her time there and snowballed into evidence that one of the owners – a man called Simon Erl – is actually a Neo-Nazi.

Thank you to @internationalperfection for speaking out. We applaud your courage and bravery. We are supporting you and boycotting #templedonuts – We are only relaying the voice of the victims. Please, follow them, listen to what they have to say, share their experience to the world, make sure their voice is heard. Please, consider how you use your money, be wise and be considerate. Boycott Temple Donuts. – @independentleeds @leeds.independentlife #leeds #vegan #templecoffeeleeds #templedonutsleeds #veganleeds

When we said that Temple Donuts’ co-owners is a neo-nazi, we were not joking. Nothing to say Simon? – Thanks again to @newo_imagery for sharing this screenshot. Please, CHECK their story about #templecoffeeanddonuts. SHARE IT. – #leedsvegan #leedslife #leeds #templedonutsleeds #templedonuts

And it was right in front of our eyes. – We cannot thank enough @newo_imagery for their work and all their USEFUL screenshots and explanation. We strongly advice to FOLLOW them, to have a look to their STORY and SHARE IT as much as possible. In those difficult times for the black community, we need to stand strong against racism, discriminations and any kind of bigotry. More than never, it is our duty to share the voice of the concerned, of the victims. To all of you: we believe you, we support you and we will help you. TEMPLE DONUTS NEEDS TO BE EXPOSED. BOYCOTT THEM. USE YOUR MONEY WISELY AND SUPPORT POC-OWNERS BUSINESS. – #leeds #leedsvegan #templecoffeeanddonuts #leedslife #templeleeds

Still from Simon Erl. Wondering who is he? Just the co-owner of Temple Donuts showing off his nazi goodies. Who would have guessed, from a company that built their reputation on activism and inclusivity? You did not know before? Just like us. But now you have the keys to change things – please, consider boycotting #templedonutsleeds and giving your money to POC-owners business. – #leedsvegan #leedslife #leedscoffee #leedsdonuts #templecoffeeanddonuts

We would like to thank @skeinhead for their courage. They spoke out about a difficult but important matter about James Norton, Temple’s manager. Please, follow them, listen and read about what they have to say, share their experience, and support them. It is important that they know that we believe them. – Temple Donuts, co-owned by neo-nazi Simon Erl, is proud to present their racist abusive managers: James Norton. You should consider boycotting Temple Donuts. – #templedonutsleeds #leeds #leedslife #leedscoffee #leedsvegan #leedsdonuts #templecoffeeanddonuts

Oh no, just when we thought that he was a racist neo-nazi, co-founder Simon Erl is also homophobic. It is also important to remind you: Simon has deleted all of these posts AND then deleted/deactivated his Instagram. Many thanks to everyone who managed to get screenshots before he tried to get away with it. – BOYCOTT TEMPLE DONUTS. GIVE YOUR MONEY TO POC-OWNERS BUSINESS. LISTEN TO @internationalperfection AND @skeinhead. – #leeds #leedsvegan #leedsdonuts #leedscoffee #leedslife #leedsindependents #leedsindiefood

Thanks for the picture. We are amazed to see how the community is working together to take them down. Keep up the good work but BE SAFE out there. – #templedonutsleeds #leeds #leedslife #veganleeds #leedsindependents #templecoffeeanddonuts

Damn. Normally I try and play Devil’s Advocate not these things and see both sides of the story, but I don’t really think there’s any way that you can defend what Simon Erl has been posting on his social media here. Maybe there’s some way this James guy can try and justify his actions as they’re not accompanied with screenshots/receipts, but if two people are coming out and saying those things about him then I think it’s going to be very difficult for him to disprove them.

To be honest, it doesn’t sound like he’s going to be able to do so in the slightest, as all of them seem to have deactivated their social media accounts and gone into hiding. I’m not gonna tell you what to do, but if you live in the Leeds area I would suggest boycotting the place unless they end up doing something radical in the next few days to change their ways.

Craziest thing is that Simon Erl seemed to be posting all this Nazi stuff over the internet and was literally hiding in plain site the whole time and nobody noticed. We must do better.

Finally, I’m sure there are those who are going to argue that starting a social media campaign against the shop in light of the accusations is no better than racism, but given the extent and breadth of evidence here I think it’s important to present everything so anyone reading can make up their own mind. Happy to post whatever statement Temple share when they release it, but right now they’ve gone dark which only makes their role in this even more suspicious.

For more of the same, check out when a local town disrupted a Neo-Nazi festival by buying all their beer. Awesome.