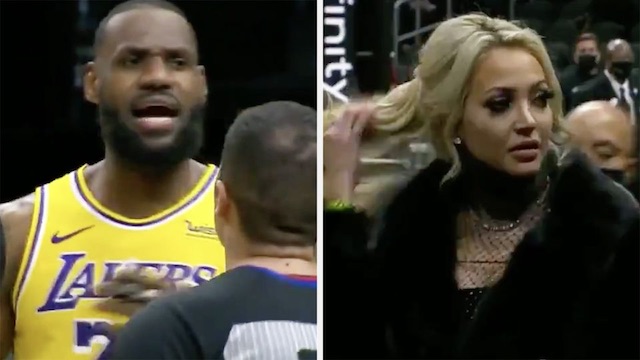 This is really funny.

It’s been a hell of a long time since there’s been any kind of weird/comedic fan interaction with a professional sports player during a game because fans haven’t really been allowed in arenas/stadiums for the last year because of Corona, but it seems like we’re making up for lost time after this woman got into some beef with LeBron James last night and ended up getting kicked out of the arena.

Lebron and his Los Angeles Lakers were playing against the Atlanta Hawks when the woman in question stood up and started yelling at James from her courtside seat. Unfortunately, this meant that the referees ended kicking her out and she then took to her Instagram account to repeatedly film her thoughts about the incident as she became more and more angry and stressed out about it.

They’re pretty funny but she does come across as a major Karen, which is exactly what LeBron James termed her when he tweeted about the situation after the match:

The referees stopped the game after LeBron was heckled by a spectator in Atlanta. pic.twitter.com/apoDqvt4ll

Hawks Karen is still going at LeBron on Instagram “Excuse my I have courtside seats that I pay for, fuck you LeBron you’re a fucking pussy”

Lol. In fairness to LeBron, he did actually perform an interview where he says that he felt sorry for the woman and that she probably didn’t deserve to get kicked out for her indiscretions, but even so it’s really funny seeing her reaction and seeing LeBron call her a ‘Courtside Karen’. Probably only a matter of time before the internet finds out everything about her and ruins her life.

LeBron James on what happened courtside with the fan pic.twitter.com/S1kQdsCsbq

For more of the same, check out when LeBron made a complete twat of himself back in 2016. It goes both ways.