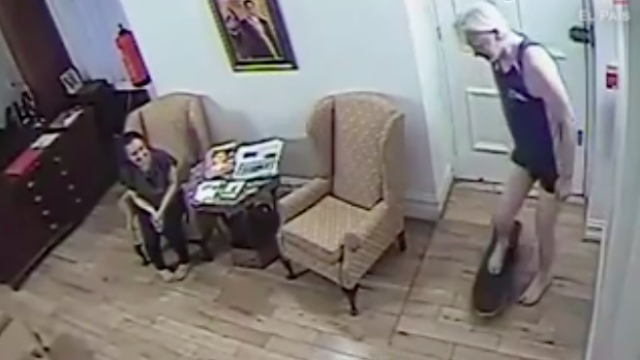 One of the weirder stories from last week involved Julian Assange finally being expelled from the Ecuadorian embassy that he’s been hiding out in for the past ten years, allegedly because he smeared poop all over the walls and had become an unruly houseguest so to speak.

Not sure if I 100% believe that although the guy did look like he had gone a bit stir crazy when he was dragged out the embassy by officials and now this video has found its way into the public domain and shows him being a bit of a weirdo in the embassy. The footage is believed to have been recorded sometime between 2012 and 2017 and shows Assange in a tank top and shorts with no shoes on, skateboarding along a wooden floor with some woman sitting in a chair and smiling at him.

To say it’s pretty weird would be an understatement:

Yeah I mean when you’re stuck in an embassy for nigh on ten years then you’re probably gonna get pretty bored and run out of stuff to do fairly quickly so I can’t really blame him for trying to learn to skateboard, even if the conditions aren’t exactly ideal. It’s just really odd seeing a guy who exposed all the bad shit that the US government was getting up to in the past living such a strange life, but I suppose there’s not much you can do when you’re stuck somewhere like that for that amount of time.

For more of the same, here’s the story about him smearing poo everywhere. That’s even stranger.