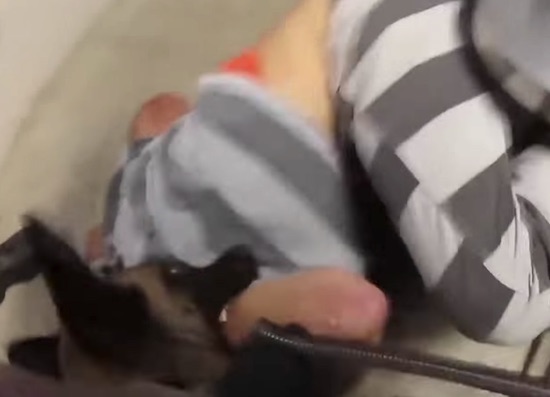 The sheriff claims this was justified.

There isn’t much scarier than being attacked by a savage dog or wild animal, which is probably why police train K9 units in the first place.

You would think that K9 units would only be used on the most dangerous criminals, but the footage below might make you think differently. Taken in Columbia County, Oregon, it shows a K9 unit and some jail wardens bursting in on a prisoner and unleashing a dog called Lars on him.

Lars absolutely brutalises the prisoner, biting at his arm for about 20 seconds before he’s finally released and then lavished praise upon by his handler:

Kinda screwed up right? Surely this guy IN HIS CELL couldn’t have deserved that kinda punishment. Here’s how Columbia County Sheriff Jeff Dickerson explained the video by saying the following:

We do not relish having to resort to force. We do what we can to minimize the length and intensity of these confrontations to protect the staff AND the inmates from severe injury.

Incident reports indicate Christopher Bartlett, an inmate who had been combative with deputies and may have a history of mental illness, needed to be moved to a different pod in the jail.

Dickerson says the August incident with Bartlett, who resisted and was documented to be combative, was reviewed and deemed a justifiable use of force. In fact, Dickerson says, it went exactly as it should have, with Lars seizing the inmate, and the inmate being removed ‘without serious injury’.

I mean I don’t know myself – sure, what he’s saying there makes sense but with no footage of Bartlett before or knowledge of what he was like prior too this incident, it kinda looks like they just run in there and mess him up real good with that dog going absolutely savage on him. Seems like the cops didn’t feel too bad releasing the footage though so maybe they actually know what they’re talking about and backing it up.

For more of the same (kinda), here’s a pitbull stepping into to save his owner’s life after another dog attacks him out of nowhere. Hero.