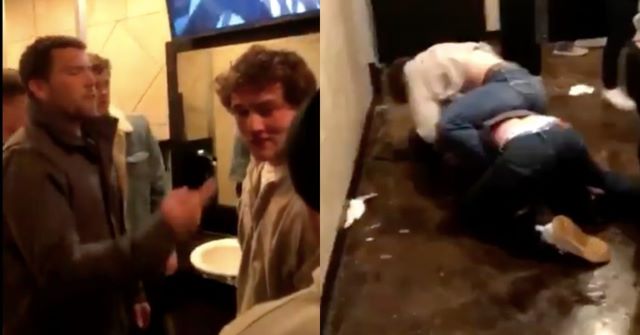 Yesterday we shared a video of a couple of college football players from the University of Oklahoma picking a fight with two smaller men, only to then be laid out on the piss-stained floor of a campus bar bathroom when it turned out the two men were amateur wrestlers with MMA training.

Video clearly shows the “SUPERB KID” being a fucking bully and thinking he was about to steam roll a smaller guy.

One of the football players, Spencer Jones, had to undergo four-hour facial reconstruction surgery and almost lost his eye during the incident. He’s now pressing charges on the young men who beat the shit out of him and his buddy, and his laywer has even told OU Daily that his client was only trying to be a ‘peacekeeper’. Say what?

Woodrow “Woody” Glass of Ward and Glass, L.L.P., in Norman has been retained by Jones’ family as legal representation, and confirmed the specifics of the altercation and Jones’ situation to The Daily late Saturday. …

Glass also said the cause of the altercation is still murky, but that Jones was “trying to be a peacekeeper.”

The video begins with Jones telling his assailant to “Get the f*** out of here,” before the perpetrator wiped blood from his face on Jones and initiated his attack.

“He was trying to de-escalate that situation,” Glass told The Daily. “But unfortunately, it wasn’t de-escalated despite his best efforts, and he became the victim of this vicious assault you’ve seen.”

Now obviously this laywer is going to make out his client was the innocent party – that’s what he’s being paid to do after all. But it’s just difficult to believe that Jones was trying to be a ‘peacekeeper’ and ‘de-escalate’ the situation based on that footage. I mean we all have eyes and ears, don’t we? We all saw exactly how it went down on camera.

Unless… the video is deceptive? Like they say – the camera adds 10 pounds. Maybe the camera also makes Gandhi-style peacekeepers look like obnoxious, violent instigators and bullies? Seems that’s what the lawyer is tasked with proving, anyway.

The dude in the hat who suplexed Spencer’s buddy has already given his side of the story:

Just to get rid of the misconceptions, I’m the fellow in the beanie and that is my brother. We ARE NOT wrestlers at any university, we have been wrestling since we were in diapers and MMA/Cage Fighting since we were 12. They gave us no options unfortunately. We showed restraint.

According to Braden, he and his brother “showed restraint”, which I guess is in reference to before fists started flying and chokeholds were applied. Because once they got going, they really put a beating on those two. Then again he does say they’ve been wrestling since they were in diapers and cage-fighting since they were 12, so maybe that was showing restraint as far as what they’re really capable of.

Anyway, if it does end up being proven that the football players were the ones who started the fight, it does seem a bit silly for them to then press charges just because they got their butts whooped. Maybe they should have just started a GoFundMe to pay for Spencer’s surgery instead?

To watch a man get bodyslammed out of his shoes for confronting a prisoner over stealing his seat, click HERE. Ouch.