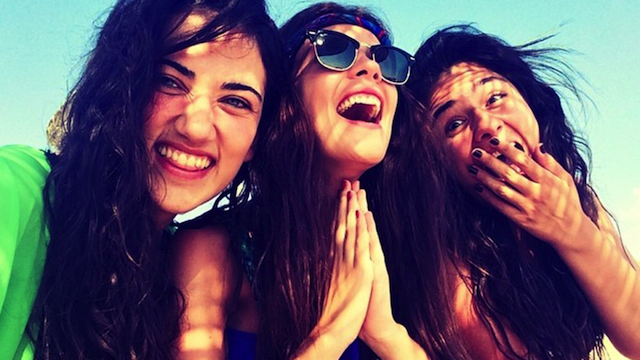 Finally, a worthwhile use for the selfie.

Laughter is one of the natural highs us humans can enjoy. It’s free, you can experience it anywhere and it’s not race specific and it won’t send you to an early grave like these 5 legal highs might.

Yet, during a speech to celebrate the end of Ramadan last Monday, Bulent Arnic, a co-founder of Turkey’s Justice and Development party tried to reconceptualise this innocent activity as specifically masculine. The politician declared that – along with Turkish Soap Operas, using cars too often and women being on their phones continuously – the laughter of women in public is immoral.

I know. Absolute bullshit, right? Now, being a woman who laughs on a very regular basis (often in inappropriate situations), I foolishly overlooked the abhorrent sins I have committed, with every cackle and howl that I’ve let out in public. How naÃ¯ve of me not to realise how immoral I have been. Please, lock me up and throw away the key.

It’s ludicrous. An example of some of the archaic and absurd beliefs that still exist in today’s society, when we have made such strides towards gender equality (although there is still a long way to go).

However, the joke (quite literally) is on Arnic. Proving the importance of Social Media, Turkish women and women all over the world were able to join in protest against his nonsensical argument. Thousands of women posted images of themselves laughing accompanied by the hashtag #kahkaha, which means ‘laughter’ in Turkish.

Here are some of the tweets:

A day without laughter is a wasted day. Women of the world: Yes we laugh! #kahkaha #direnkahkaha pic.twitter.com/O9CtVcI7HQ

Me when Turkish deputy PM Bulent Arinc says women should not laugh out loud in public. #kahkaha pic.twitter.com/eO9cCuKbod

#kahkaha #direnkahkaha To all my Turkish sisters- have a laugh with me! And yep I’m a PAGEANT queen! 🙂 Mrs Virginia pic.twitter.com/SmtBssR2Na

This is an example of how as well as enabling us to keep tabs on Justin Bieber (as we know every Sick Chirpse reader does religiously) Social Media can be used as a tool to give oppressed sectors of society a voice with which to reply. And, just to cement my point, here’s a video just for you Mr Arnic: