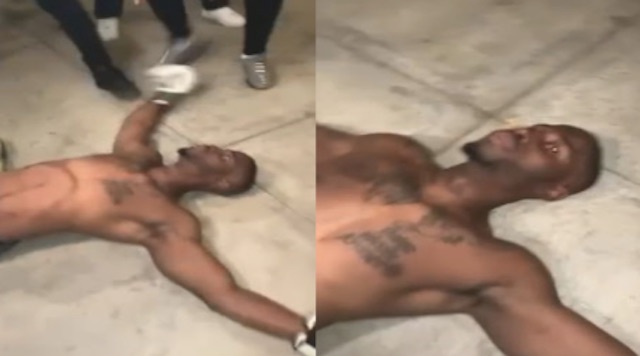 The hatred and resentment between a tenant and their awful landlord can be one of the biggest out there, so you can imagine that if a landlord challenged a tenant to en eviction boxing match then they had better be ready to have hell unleashed on them.

Unfortunately for the guy in this video, it looks like he underestimated his tenant because he ends up getting his ass knocked out cold after about ten seconds of fighting in the so called ‘boxing match’. In fairness to the guy, this isn’t really a boxing match so much as a couple of people swinging wildly at each other for about twenty seconds with boxing gloves on, but even so the guy has gotta feel a bit silly after putting something like that on the line and then getting so badly dominated:

That’s all she wrote. Of course, we don’t know for sure if this is what was really going on in the video as that’s just what it was titled, but I find it hard to believe that someone could even make up an arrangement as diabolical unless it was actually happening.

A bad landlord is definitely the kind of person who could do such a thing in real life, so I’m happy to believe it. I suppose we have to entertain the idea that the landlord wanted to box the tenant because he was a complete knob and deserved to be evicted, but it’s a much better story that it was the other way round so let’s go with that one.

The other aspect of this that we have to talk about is where the hell is it all going down? Seems like some mad underground fight club and definitely not an officially sanctioned boxing venue or anything like that. Hope they make some more videos because it looks violent and terrifying and that’s just how we like it.

For more of the same, check out this three second knockout in a bare knuckle boxing match from the other week. Lethal.