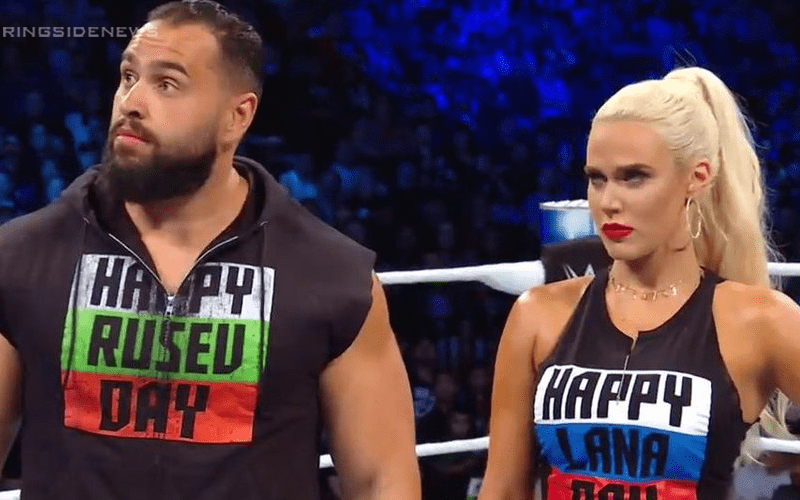 One of the most memorable parts of any Wrestlemania are the grandiose and OTT entrances that some of the wrestlers get, as was the case when Rusev showed up to the ring in a fucking TANK to fight John Cena at Wrestlemania 31.

A few months ago, now-former WWE star Rusev implied on Twitter that he and Lana had shagged in the tank prior to making their entrance:

This week, Lana has confirmed that this story is true, after posting a picture of her with Rusev on the beach noting that they had “just had sex in the Black Sea”. She then added that they also had sex “on the tank at WrestleMania”.

We just had sex in the Black Sea @tobemiro ! And on the tank at Wrestlemania!!! ????

Unfortunately I can’t share the Instagram post in question because apparently Instagram found it offensive and took it down. Lana was understandably very upset at not being able to share the fact she had shagged her husband in the Black Sea and in a tank at Wrestlemania:

Instagram is prejudice towards the Black Sea, prejudice towards the Bulgarian brute, towards Bulgaria. Because I don’t see any other reason why all 95 percent of IG can post explicit content but I can’t post a picture kissing my Bulgarian husband in Bulgaria ??? But all the Americans in America can ? At least #tiktok apologizes for being prejudice but IG you are the worst ! You allow me to get bullied by so many people on here and then descriminate towards REAL LOVE !

Lol. Is she in character there? It’s hard to say. Either way I’m in agreement with her. How can Instagram deny this lovely couple the opportunity to inform their millions of followers that they banged in an armoured mechanical blast-proof killing machine at Wrestlemania?

I guess maybe IG thought the idea of these two crazy kids shagging in a goddamn tank might be too much for the average user to handle. Still, fair play to Lana for at least trying to share her story with the world. Getting paid to travel the world and wrestle and have sex in a tank before riding out in front of thousands of adoring fans at Wrestlemania must be pretty nice.

To read about the WWE fan who paid $400 to ask Alexa Bliss out on a date, only to be rejected, click HERE.