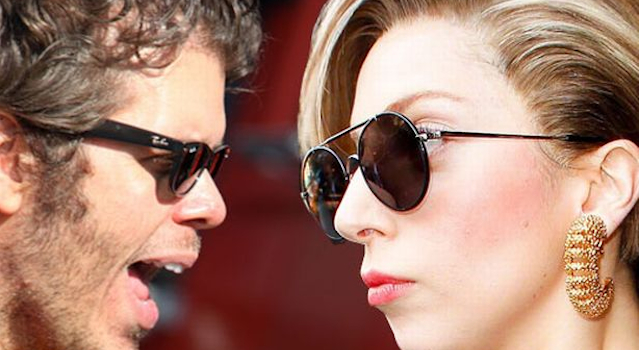 Lady Gaga and Perez Hilton used to be the best of pals but now they’re publicly beefing each other out via Twitter in a particularly bitchy feud.

As far as Twitter beefs go this one seems like it’s really up there as one of the most venomous we’ve ever featured. A lot of people lose their shit on Twitter on a regular basis but it’s kinda rare that a really serious argument erupts over it, and this is exactly what happened between Perez Hilton and Lady Gaga. The fact that the two used to be best friends until only around 6 months ago makes the whole thing ever more intriguing.

Nobody is really sure why the two have fallen out but Perez Hilton apparently keeps posting loads of blog posts about how Lady Gaga’s new song Applause is really lame, which is in stark comparison with his approval and the general buzz he is lending to Katy Perry’s new track Roar. Uh oh – female pop music politics. That is something I definitely do not want to be involved in ever.

Another piece of integral background to this story is that Perez Hilton is currently in the process of moving his family from Los Angeles to New York and is currently in New York City hunting around for new apartments. This is where things start to get freaky/bitchy.

Basically on Sunday some Twitter user called @PrinceNeptune_ – who judging from his timeline seems to be some fan obsessed with Lady Gaga who follows her around NYC getting photographs with her and kinda knows her a bit – sent the following tweet:

PEREZ HILTON IS AT GAGA'S APARTMENT OH MY GOD

Obviously this was pretty shocking stuff! Even more amazingly Lady Gaga somehow managed to see this tweet and then went completely crazy bombarding Prince Neptune with tweets asking him what was going on. It kinda stinks of paranoia and kinda suggests that something really serious is going on between the two of them:

â˜› The Big Lady Gaga Question: Does Lady Gaga Have A Penis?

You go get ’em slugger. Gaga then immediately turned her attentions to laying into Perez Hilton via Twitter, which probably isn’t really the best way to deal with this issue. Her tweets have since been deleted but you can check out the screengrabs of that on the next page:

â˜› Lady Gaga Can Be A Bit Of A Jerk: Check Out Lady Gaga’s Tour Rider